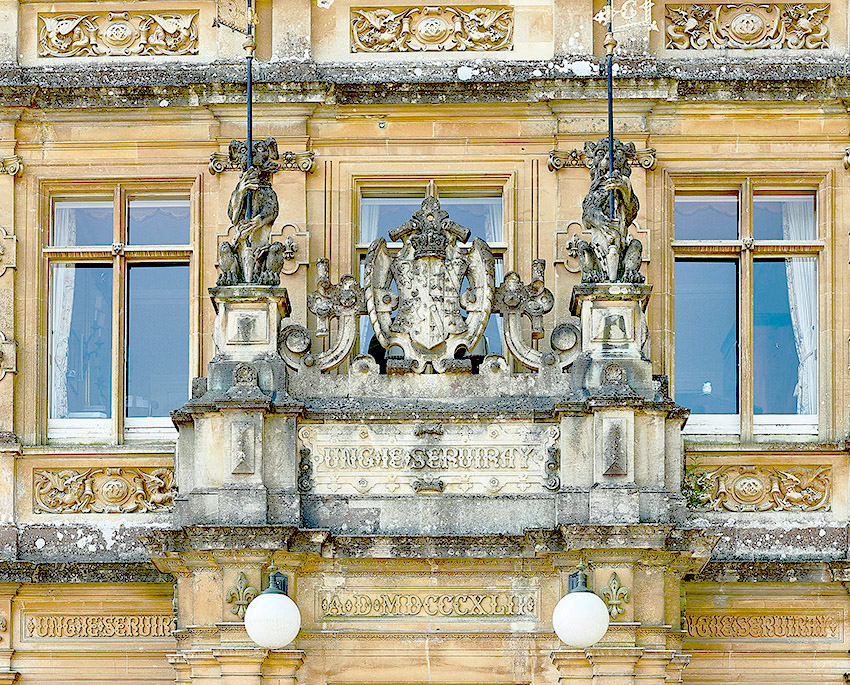 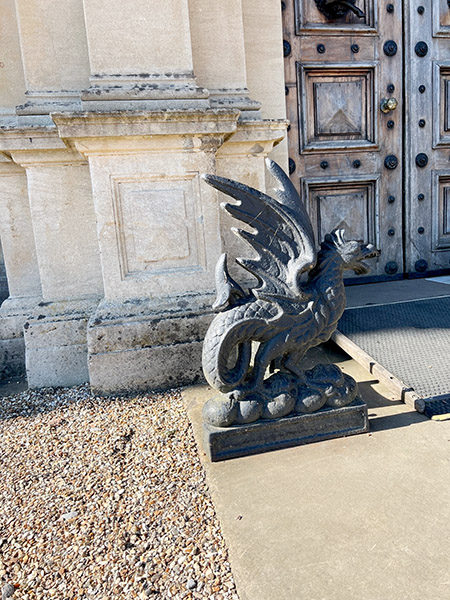 Our early mornings are now busy with visitors taking selfies outside the tall walnut front doors of the Castle whilst they wait for us to open. As they look out happily smiling, I wonder how many glance down and notice the two black wyverns that sit either side of the front door. Then, when they come into the castle, do they see that there are two more large terracotta wyverns standing on either side of the half glass doors which lead into the Saloon? 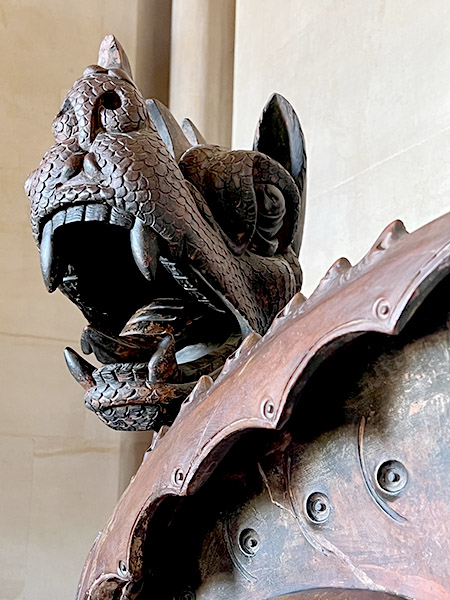 Wyverns look a little like dragons but have only two legs, unlike a dragon which has has four, and they are an imaginative mixture of a scaly reptile and dragon type often used in heraldry. Typically a wyvern is depicted resting upon its legs and tail but it can also be shown with its claws in the air and supported only by its tail.
These carved figures recall the Anglo-Saxon times and are symbols often associated with the Kingdom of Wessex which was nearly completely overrun by the Vikings around 870AD but was finally united and protected through the military endeavours and the later cultural leadership, of the renowned King, Alfred (849-899AD).
Under King Guthrum, the Vikings had swept down from their northern kingdoms and, in a lightning strike, seized much of what is now Wiltshire and from there laid waste to Wessex. Alfred withdrew in haste to the Somerset tidal marshes with what few followers remained. From there he reorganised the fyrd (existing army), calling more to his cause but keeping them to a rota basis to enable him to could raise a ‘rapid reaction force’ to deal with the raiders whilst ensuring that farming could continue, thus preserving food supplies. Apart from mythically burning the cakes (his mind might have been elsewhere), Alfred proved himself a creative and innovative leader on the battlefield. Finally, in May 878, his army defeated the Vikings (Danes) at the battle of Edington and they all sued for peace, creating a north south divide across England.
The centre of Alfred’s world was his royal palace in Winchester from which he developed a network of burghs so that no one was more than 20 miles from the refuge of one of these settlements. In addition, he built new fast ships to create a navy which helped support and protect Wessex and southern England. The very word borough’ comes from the Anglo Saxon meaning a fortified market place as Alfred needed both to promote trade – markets – and defend the population. Towns today still bear reference to these origins – New-burgh-(bury) is one example which is the town closest to Highclere. 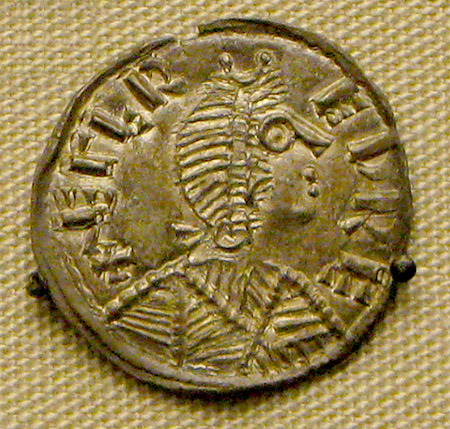 Having achieved that, Alfred then turned his attention to the general deterioration in learning and religion caused by the Vikings’ destruction of monasteries which, at that time, provided the only, rather rudimentary, education available. This was not altruistic – if no one could read and write, and very few understood Latin, then the legal charters through which royal government was enacted were worth little and there was a risk that his instructions would not be carried through.

He also decreed that a number of books which he thought “most needful for men to know” should be translated from Latin into Anglo-Saxon. These covered history, geography, philosophy and included Gregory the Great’s ‘Pastoral Care’ (a handbook for bishops). In many ways, this exercise really marked the beginnings of English literature in this country. The compilation of the Anglo-Saxon Chronicle also began during his reign, circa 890. 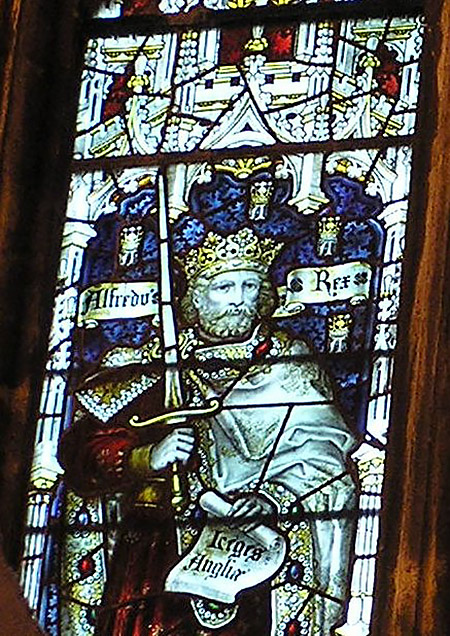 Finally, he also established a legal code. Drawing on the laws of Offa and other predecessors plus those of the kingdoms of Mercia and Kent, Alfred added his own administrative regulations to form a definitive body of Anglo-Saxon law.
‘I … collected these together and ordered to be written many of them which our forefathers observed, those which I liked; and many of those which I did not like I rejected with the advice of my councillors … For I dared not presume to set in writing at all many of my own, because it was unknown to me what would please those who should come after us … Then I … showed those to all my councillors, and they then said that they were all pleased to observe them’ (Laws of Alfred, c.885-99). 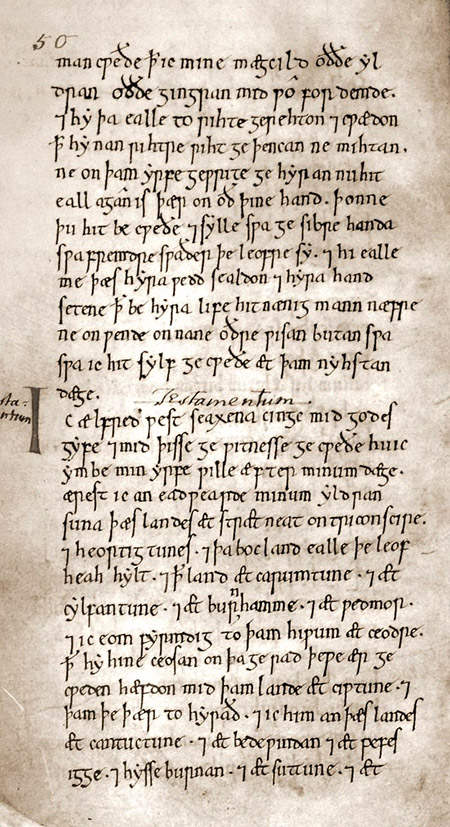 Protection, negotiation, trade, reading, understanding and the structure of law were held dear by this King, some of whose cultural achievements have been passed down over generations to this day. Many of these have been regarded as of little value in recent years but it is perhaps pertinent to remember that he was, and still is, the only king to be called Great in this country: great both for what he achieved in himself and for what he sought to achieve for others.