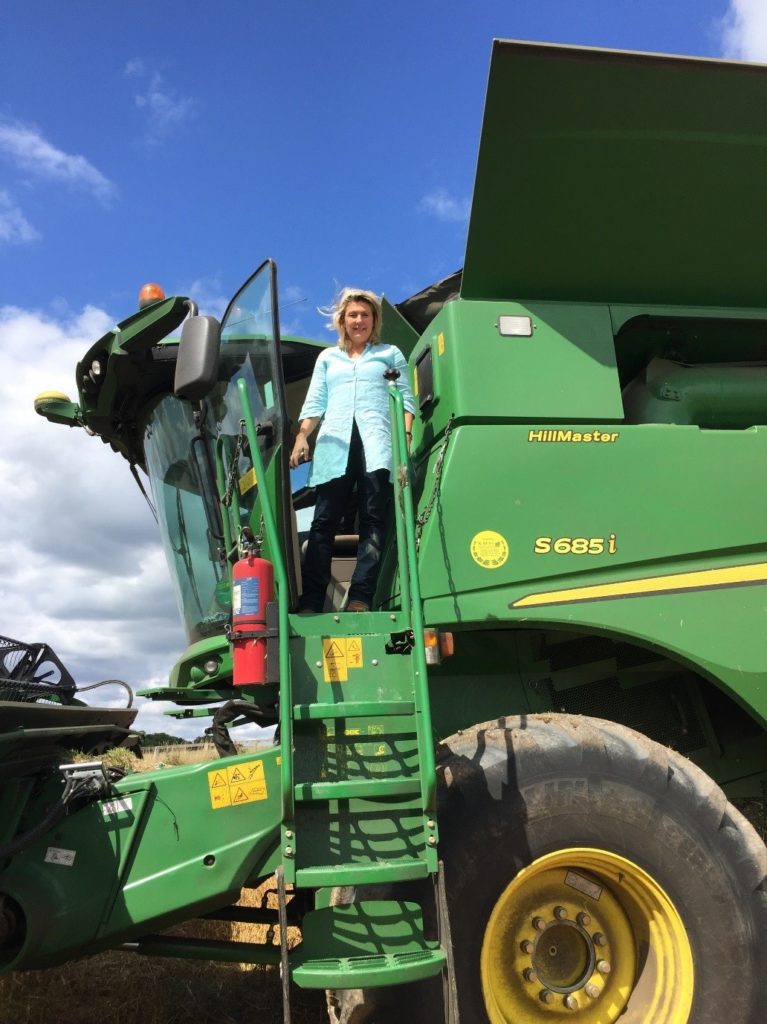 When I was growing up I can clearly remember a song which began “I’ve got brand new combine harvester and I’ll give you the key …” It was sung by the “Wurzels”, in thick West Country accents, but it did actually top the charts. It came straight back to mind when I climbed up into our combine harvester as part of my efforts to understand a little more about our farm and how it works.

Brian, who drives the combine through the weeks of harvest, put me in the driving seat and, with a sunny word of caution – “The edge of the Lime Kiln field is sharp and deep, so don’t go down it”, I lurched forward.  Funnily enough I had just been discussing vehicle insurance with my husband so, feeling even more panicked, I achieved barely 2 km an hour. Luckily Geordie neither knew what I was doing (plus ça change), nor was anywhere near.

Not wishing to let the side down I began to go forwards as directed and then put down the head so the cutter could begin to harvest the rapeseed. Given it was the first time up the field I had to steer, whilst thereafter the GPS would kick in. They are extraordinary machines, able to separate the crop from the stalk which is then chopped and spewed out the back. Young Robert had come with me out of interest and because he was going to try to take some video. (The office suspected it would be hilarious and they wanted proof.) He had already found the cross country journey interesting as I drove rather close to hedges and along game crops to find the right field. He then spent much of his time leaping around to avoid the blades and the dust whilst finding how prickly the remaining stalks of the rapeseed crop were. I managed to turn round, go forwards and back before settling in at a steady 3km an hour which Brian had said was about right.

Farming was the core of the transformation from nomadic tribes to settled societies and a good harvest was essential to survival. Bronze Age people farmed on the western side of the Highclere estate where the soil is lighter. By the Iron Age, farming tools had improved and the area of cultivation had increased slightly but it was with the arrival of the Romans and their stronger ploughs that our predecessors began to farm where we are harvesting today.  Food production remains a significant business from collecting the grains to their transportation to be refined and used in a myriad of different everyday foods, all of which we take for granted every time we enter a supermarket. 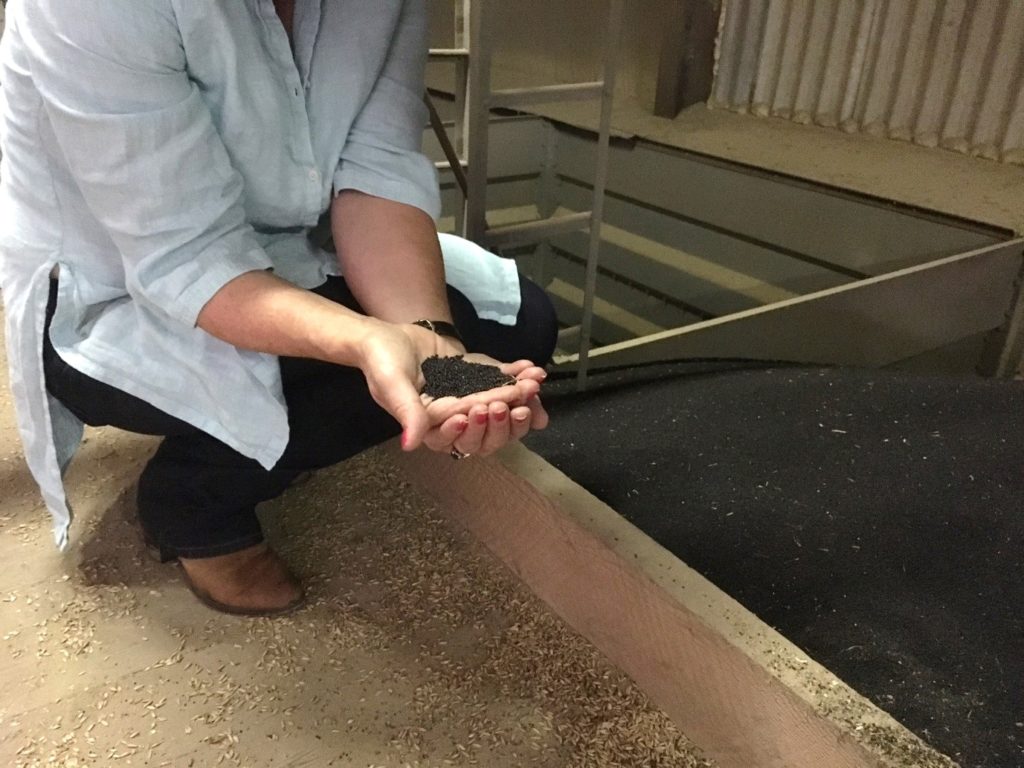 People often also forget that much of the landscape, particularly in this country, that they enjoy walking in, exploring and admiring, with its colourful patchwork of fields, hedges, woods, downland and hill-country, looks as it does because of the work of farmers. Like every other farmer we carefully review sprays and fertilisers to focus on what it best for the soil, the wildlife and the budget. We practise crop rotation to clear out invasive weeds. This year my husband is really worried about the weather: some of the crops are flattened, prices fluctuate and he hopes we might break even. Farming is a way of life for us. We know where our food comes from; we keep high standards of harvested crops and aim like other farmers, to survive to farm another year. We employ people, contribute to the food supply chain which in turn employs millions of people –and produce good food. 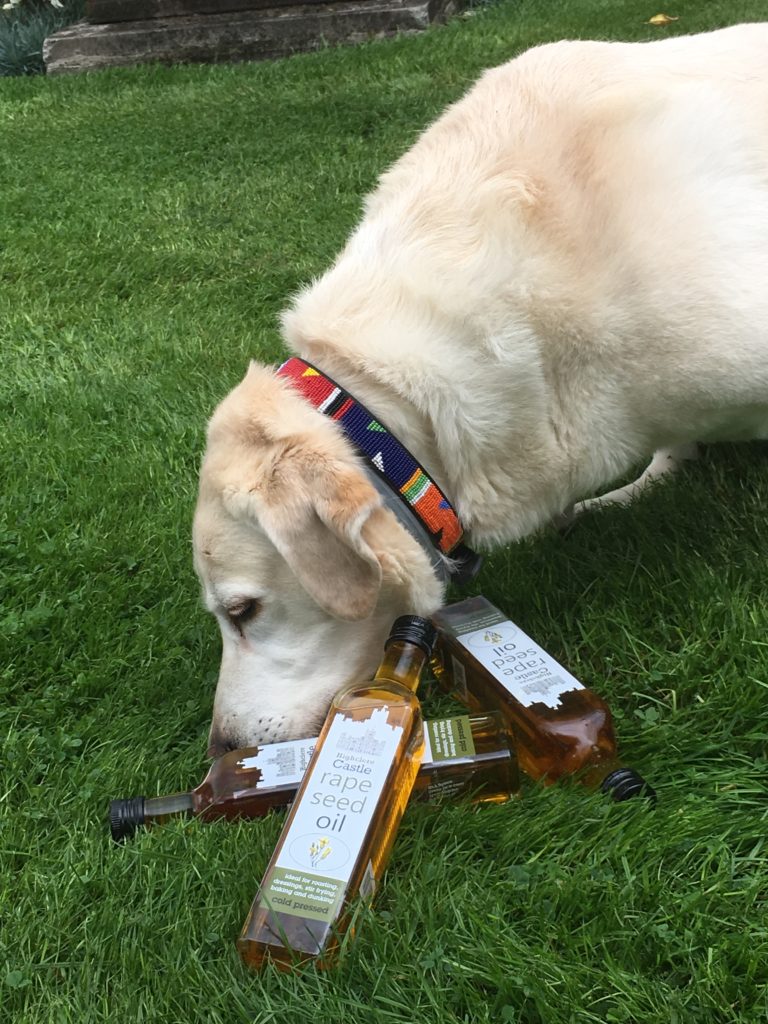 I enjoyed driving the combine harvester and I will be back even if, unlike in the Wurzels’ song, it is not brand new. The rapeseed I harvested will be cold pressed and the resulting canola oil bottled, some to use in our own kitchens and some to be sold in the gift shop. Like other cooks, I am conscious of the debate around which “fats” we should be using for our families. I certainly use butter and olive oil, sometimes coconut oil but I have found rapeseed is by far the best and safest with which to cook; high in omega 3, vitamin E, and it has a lovely, slightly nutty taste and, in the end, food should be delicious.  It is worth considering when you are shopping wherever you live.

PS I give a little to the horses and dogs as well – it is very good for their coats!!! 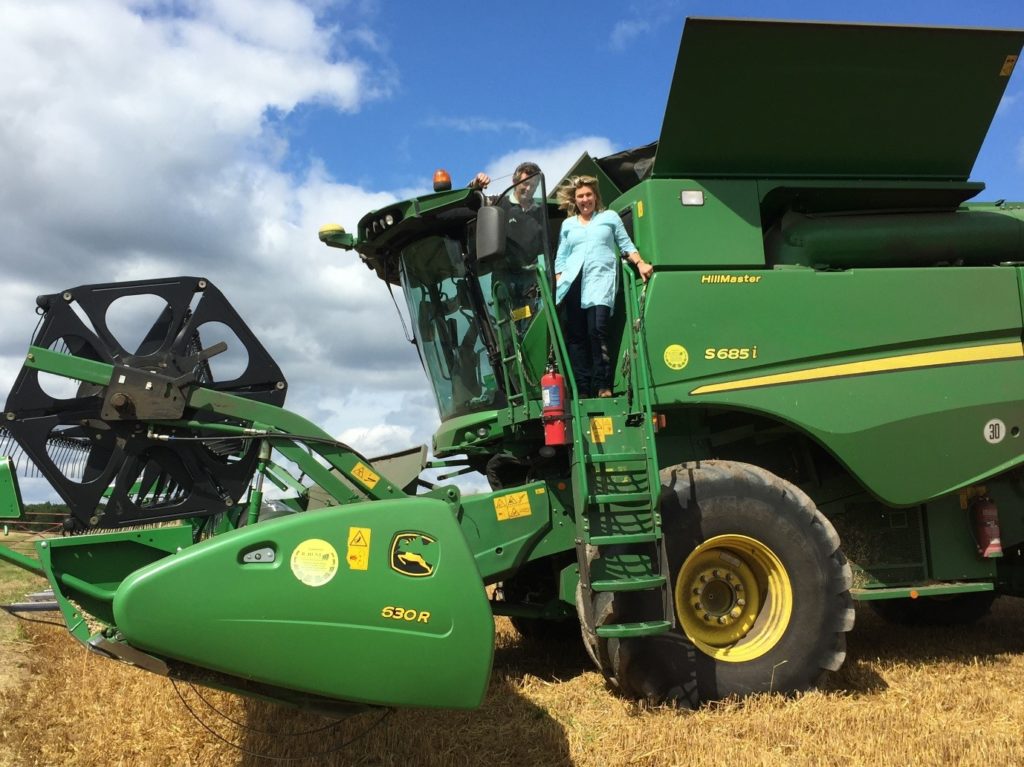