It is summer in England so it must be raining and, on this particularly damp Saturday evening, I found myself sitting in our tearoom marquee whilst Robert (security) and Paul (parking) tested the reception and call signs for our new temporary amateur radio station.

Given my heritage is partly Scottish, and Robert (security) is Scottish, it is important to note that it was a Scotsman who first predicted the existence of radio waves (James Clerk Maxwell), although the theory was developed by a German (Heinrich Hertz). Radio itself was then apparently invented by the Italian Guglielmo Marconi who sent and received his first radio signal in Italy in 1895. Four years later he managed to communicate across the English Channel so really radio is all about European cooperation, with the end result being communication and industry.

Scottish Robert promoted and led the way for Highclere’s temporary radio license: GB2HCC (Golf Bravo 2 HighClere Castle). He had just finished setting up the antennae when John, the Castle Manager, called him into the office asking for a guarantee that it was all securely fixed. Robert assured him it was and, then, grinning widely, John pointed out of the Castle window towards the lime tree and asked whether that was a radio aerial lying on the ground …. There really has been a lot of rain so Robert raced out to fix it again. It stayed up this time.

Despite our initial setback 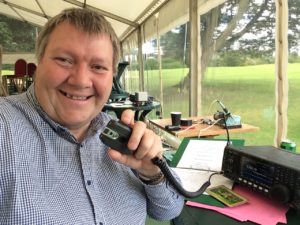 s, we spent an industrious evening having fun with amateur radio enthusiasts around the world.  Robert began to link to Germany, Morocco, Canada, South Africa, the USA and France as well as the UK. There were also some fishermen way up north in Scotland who were apparently using strong language but luckily their accents were so broad that they could really say what they liked without causing offence. Robert was very much at home, twiddling his dials and obviously familiar with the International Radiotelephony Spelling Alphabet as in Alpha, Bravo, Charlie etc. For me it was a small insight into a whole new world.  I learnt about the different prefixes for each country, the conventions and licensing and above all the camaraderie which was wonderful.

A little later Genny appeared with supper, followed by some left over scones from the t 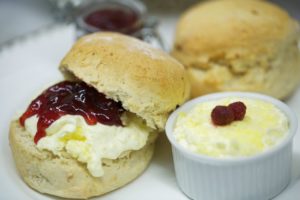 earooms. John had long gone home which I had quietly thought quite a good thing as his idea of brevity of words on the radio is not quite the same as everyone else’s. The word ‘soliloquy’ springs to mind! When I left a little later, Robert and Paul spent several more hours exchanging news with enthusiasts all around the globe.

This radio event has also been part of Robert’s project to raise awareness and money for Lupus, a cause close to his heart and home, through his call sign GOWYD and with the help of a number of very kind sponsors including ICOM, and Yaesu who helped procure the equipment.

The antennae is still up so we might try it again!

UPDATE: GB2HCC will be live again at our Heroes at Highclere weekend on 8th and 9th September 2018, click here for details.