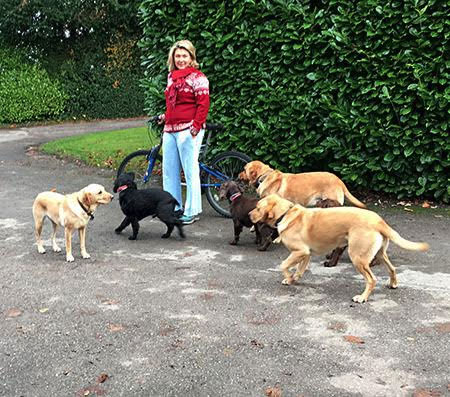 Biking up the hill of the main drive to the Castle at the end of a morning circuit of the park with the dogs, I am always glad finally to see the banks of dark green rhododendrons. With more energy than I possess at this point, the dogs run off towards them and disappear into the tangle. They are quite deaf to my calls as I carry on through the black gates and then turn back to pedal through the longer grass towards “Jackdaws Castle”.

This is a classical, pillared Temple built about 1743 on raised ground to the east of the Castle. The mass of rhododendrons screening it, also shelter a collection of azaleas. In fact this whole green lawn was once full of herbaceous beds filled with plants brought back from travels abroad. 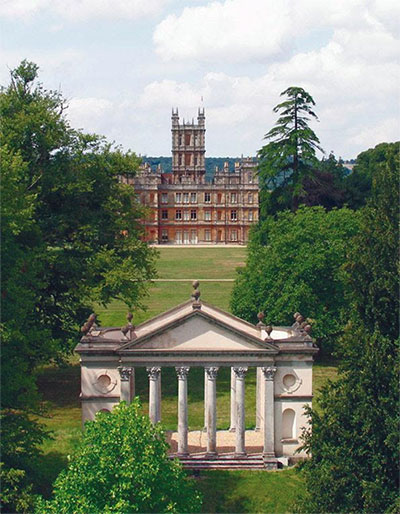 What is really remarkable about this profusion of acid soil loving rhododendrons and azaleas is that Highclere Castle sits on a chalk escarpment which therefore really only encourages lime loving shrubs and trees. They were first planted by the 2nd Earl of Carnarvon (1772 -1833), an enthusiastic horticulturist who was ably aided by his younger brother William Herbert, a botanist. In order to grow these plants, Lord Carnarvon arranged to have huge pits dug out in this area of the park. Then cartloads of humus rich acidic soil were collected from down by a lake in the north part of the Park to backfill what must have been an area of about one or two acres in order to provide a suitable environment.

The 2 nd  Earl of Carnarvon also collected seeds, notably from America, and raised the plants here in his nurseries with Mr. Carton his gardener, with further help from an eminent botanist J.R. Gowan Esq.

The gardens gradually became noted for the many fine achievements of these gentlemen and the new hybrids they raised. To quote a Gardening Magazine from the time: “the most striking crosses have been effected between “R. arboreum and the hardy species ….which are really splendid”. In 1831, he raised about 1,800 seedlings by crossing the flowers of R. ponticum and R.maximum which he gave to many friends as well as desiring that they might be distributed among the wider community of nurserymen. Various notable azalea successes were also achieved in particular, a cross of Azalea calendulacea and Azalea nudiflora var. rubescens. As a result of all these efforts, this part of the Castle garden became much admired in Victorian times and was known as the American Garden.

During the two world wars, most of the gardens were grassed over but some of the azalea beds remained, although increasingly overgrown. In November 2015 I decided to spend a few hours each weekend armed with a fork and long shears pulling out brambles to see what lay underneath. All the dogs happily snuffled around digging as well, if for a different purpose. Sometimes it seemed overwhelming, sometimes really satisfying and I have continued this year, now aided by two of our gardeners. We have progressed as far as digging out the bramble roots. The help from the gardeners’ has hugely aided this project and at long last we have real progress! What a joy it is now is to be able to see again the shape of these aged Azaleas, to think when they were planted and I fuss around them, looking for other old beds full of the right soil which you can sometimes see as indentation in the grass. Perhaps we can clear the grass and augment the collection. I have much reading to do but will enjoy researching and absorbing the letters and notes.

I hope they will be a mass of colour for our May week celebrating literary heroes and gardens which would also be an excellent time to begin to identify them. I leave you with the thought that If any of you have an Azalea Altaclarense, (Highclere in Latin), then you have a little bit of Highclere! 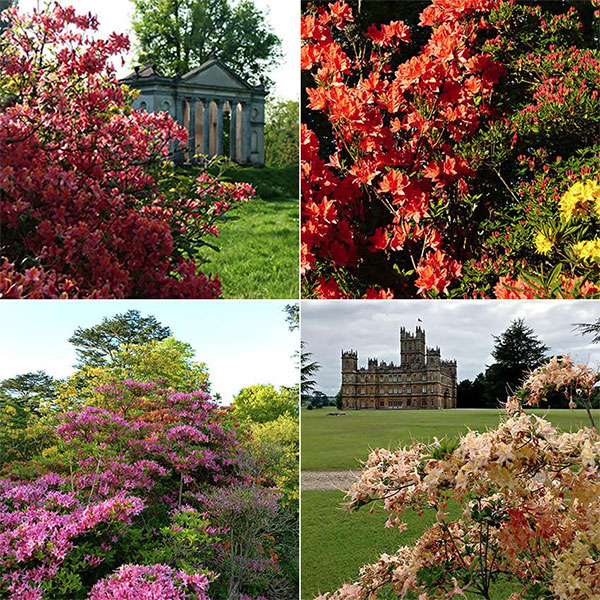