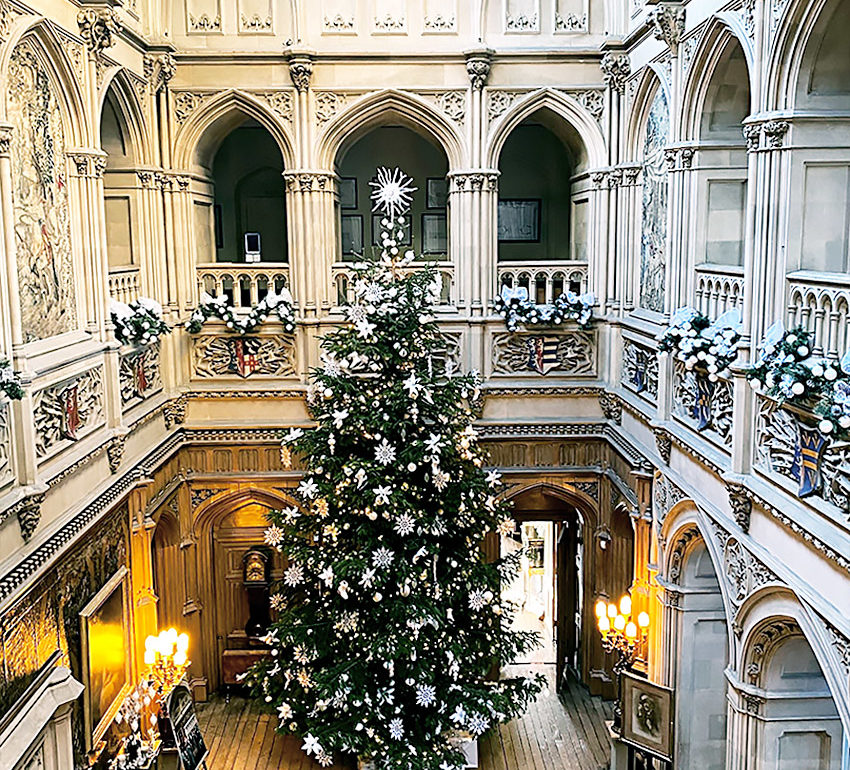 Last year, Christmas 2020, we were lucky enough to be able to open for a few tours over a two-week period before a fairly grim year came to a sudden and sooner than anticipated close. In any year, Christmas offers a moment in our busy lives to pause and wonder and to take part in a story but it seemed particularly appropriate that year, in terms of decoration and theme, that we should anchor ourselves in reds and greens, Charles Dickens and all things traditional: to look for reassurance and comfort from the past. 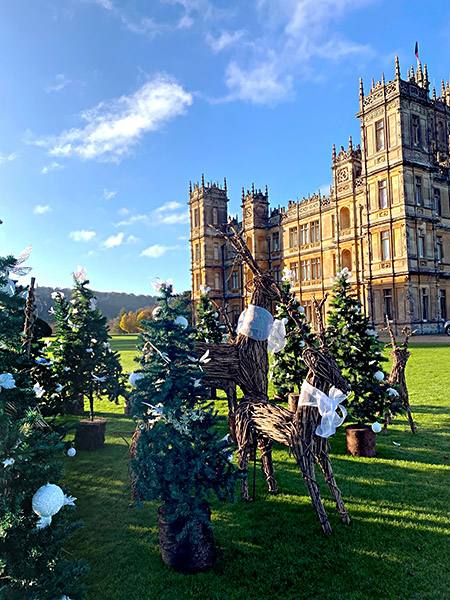 One of the unexpected results of last year’s November lockdown was that we had time to be able to make a programme with Channel 4 about getting ready for Christmas. It kept us occupied and was obviously sufficiently entertaining that it is being shown again this year on Saturday December 4th at tea time, 4.30pm.

Sitting down with chief Christmas Elf Sally in January of this year, with everything closed down and, like everyone else, feeling somewhat low and worried, we made a plan for Christmas 2021. 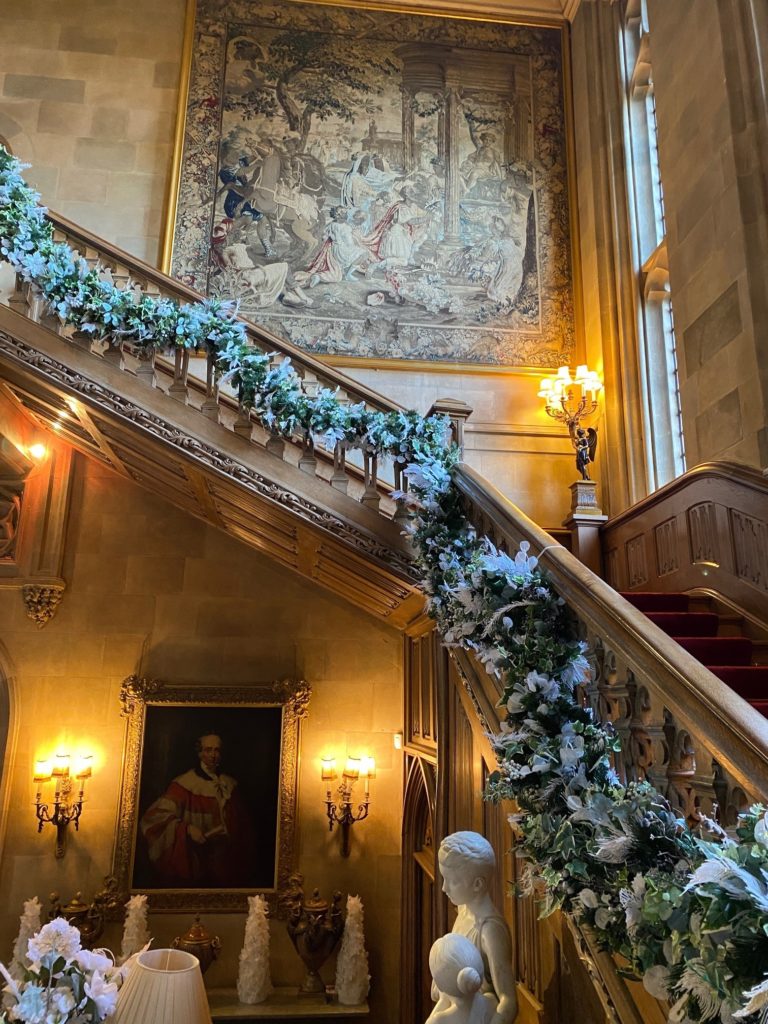 We thought it should be entirely different and looked at lightness and at white and frosty themes. In fact, since we were locked down for, as it turned out, months on end, Sally took the opportunity to make some of the garlands during those wintery months.

This was just as well as it turned to be rather bigger project than anticipated since, of course, neither Christmas trees nor the castle are really white. So instead of highlighting them as we have done in the past, the decorations had to be rather more transformative. The garland on the main staircase took hours of work, there is a second, even longer garland on the red staircase (the original Georgian one) plus Luis wanted one to go all round his Christmas marquee as well as a centre piece (Santa’s sledge and some arctic tree stems).

Meanwhile, the courtyard is a tour de force and the arch garland looks so beautiful.

Apart from the outside decorations and garlands, there are of course many trees inside.

The main tree required perseverance, a team of six and nearly 1,000 baubles to make it look white. Each State Room has at least one and often two 6ft – 8ft trees and all need to be decorated. Meanwhile, two of Sally’s gift shop elves made their way around the mantelshelves which is a delicate operation and the result is exquisite. Lastly, the large floral decorations create eyecatchers at mid-level throughout the rooms.

We are nearly finished with our preparations and it does feel light and bright, something we all miss at this time of year. It gets dark so early now and at Highclere we all try to head out for our walks before it is too late to get our dose of winter sunshine, vitamin D and all the consequential health benefits.

Now that the wind has stripped most of the outside trees of their amazing Autumn colours, the dark firs of Christmas make the lights pop even more and contrast with the reflective decorations. 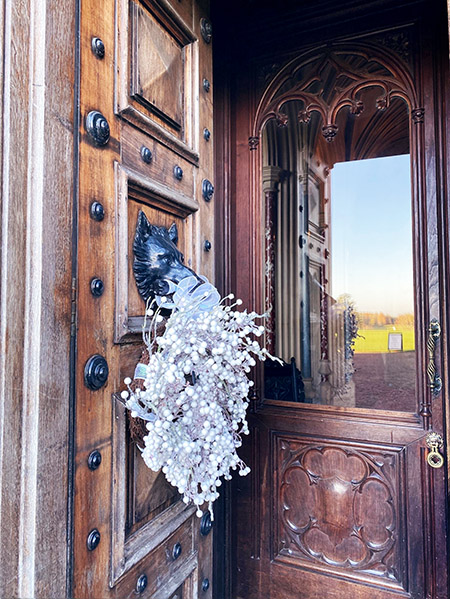 Of course light can only illuminate if it opposes the dark, a theme which is universal to almost all philosophies and religions almost to the point where, if there is only darkness, the universe and our world will not exist. We learn in the Bible that the ‘the earth was without form, and void’ until God caused light to exist: ‘Let there be light.’ Likewise, in Hindu writings: ‘Lead me from in me from the unreal to the real.’ Equally, the French philosopher Descartes believed that someone seeking truth in the sciences must first consider how to increase his “natural light of reason,” the cognitive abilities with which he is naturally endowed. 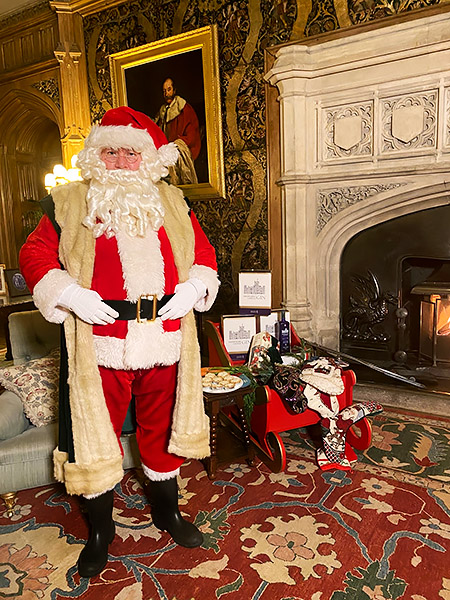 Light has so many interpretations and attributes: lightness of spirit, the light of intellectual curiosity, the illumination of thought and education. We hope to see the light and perhaps it may suddenly dawn upon us as it did in the story of the journey of the Magi.

However, whilst our theme this year is all about the white and frosty, the welcome from the Highclere team is anything but as we wait for our guests. And if the large gentleman in the very red velvet costume needs some extras when he arrives with all his gifts, we have some spare reindeer on the front lawn although this year they are sporting white bows, not red ones. Of course.