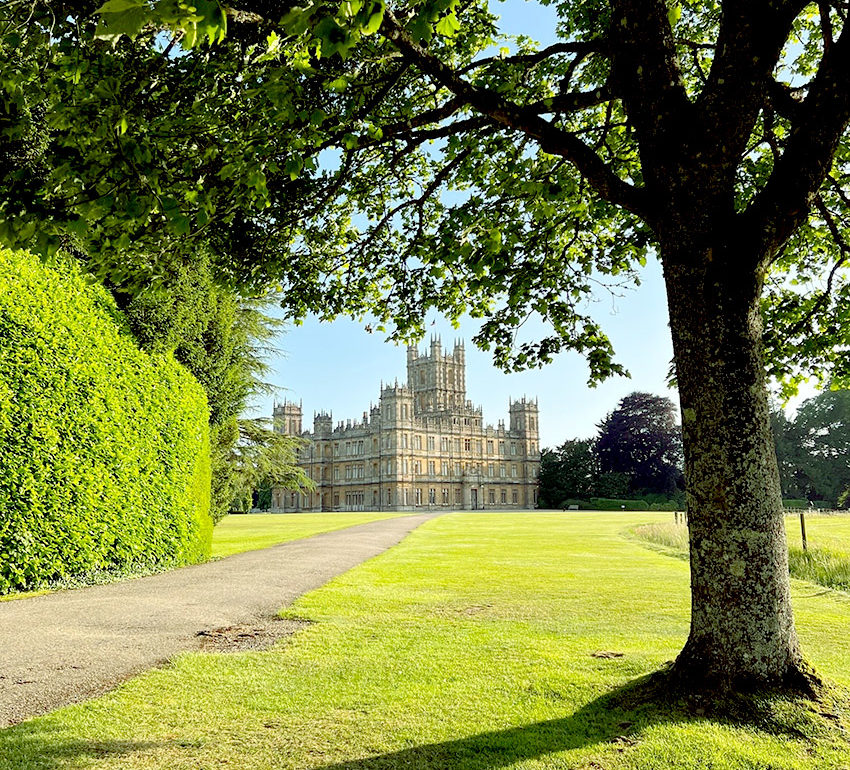 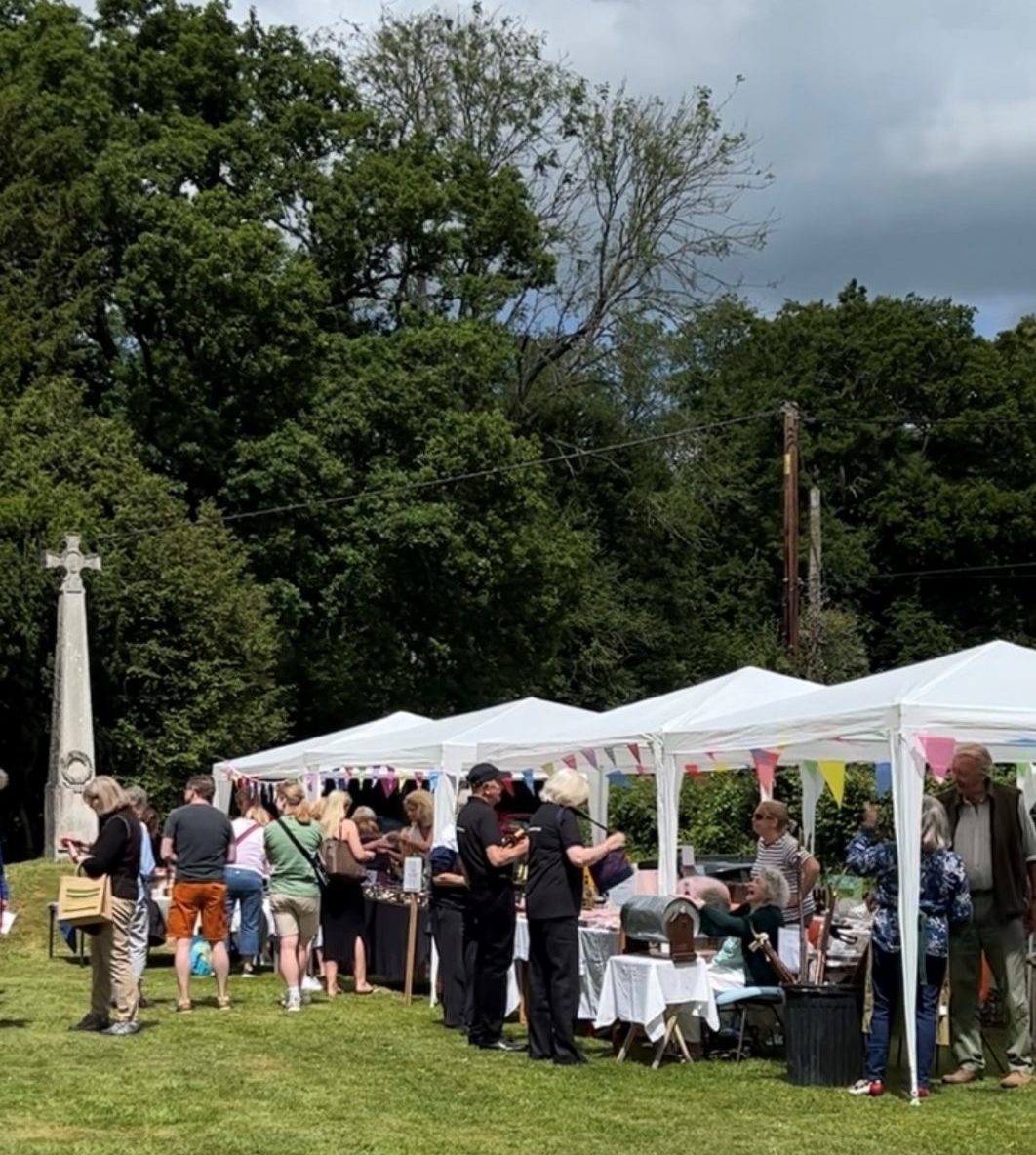 A week ago the weather forecast for this past weekend looked rather dicey but we are in England so things change. In fact on Saturday morning the sun shone and, for the first time in three years, we walked down through the Park to the Highclere Church Fete. The fete is a huge local community effort led by one couple in the village, Sally and Phil, to create a fun family day out. 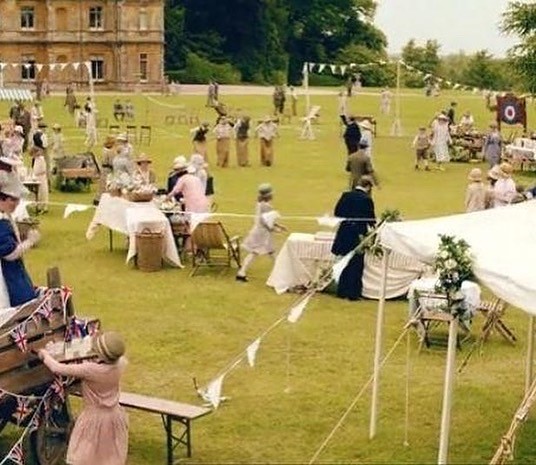 A fete is a French word from medieval times meaning celebration but being British it is about feasting outside whatever the weather. So much of our language is shared with our neighbours and just adjusted. Just like the fete  in Downton Abbey there were some traditional games as well as new entertainments. For example, the first stall where everyone stopped was one where you could throw something at a display of old China plates. There is clearly something very satisfying about throwing blocks of wood to see how much crockery you can smash and it was doing a brisk trade. We then pottered on to browse through some books, bought raffle tickets and of course the plant stall was a great success. 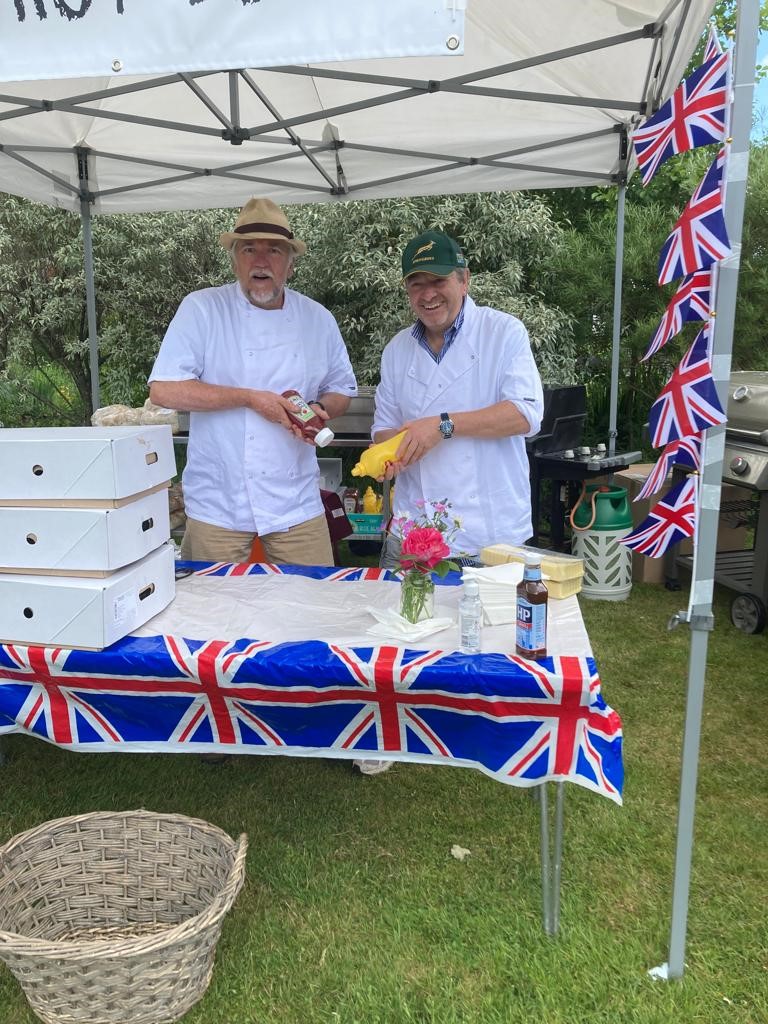 The church was full of the most delicious cakes to buy and everyone was helping cook burgers in the garden behind the church. Phil and Sally had organised a dog class – everyone loves an opportunity to see if their dogs will behave on cue ….or not as well as some clever football demonstrations or hawk displays. 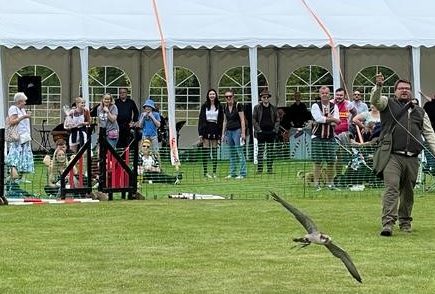 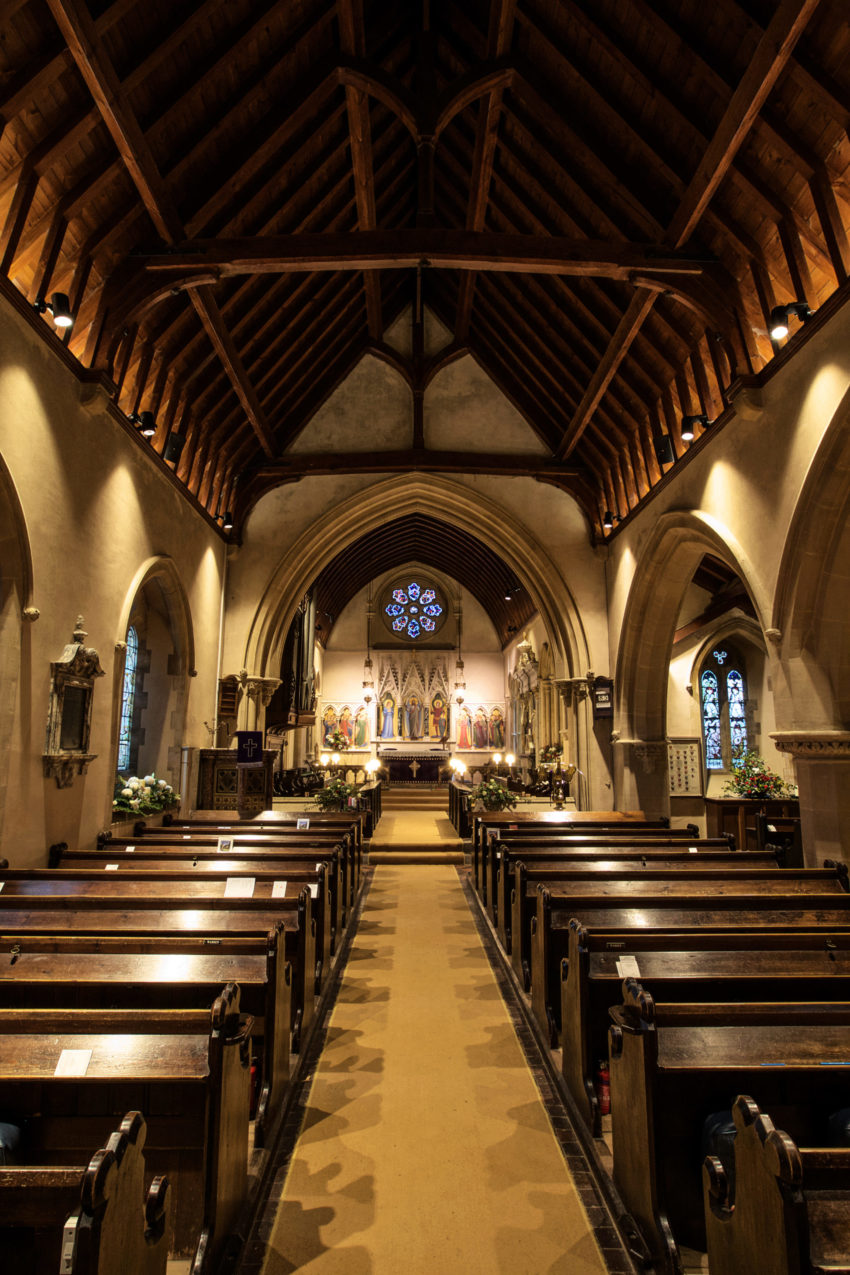 The event was organised to raise money for the church. Although it is not particularly old being built as a replacement church in the 19th century, St. Michael’s  and All Angels Church  (Highclere Church)  is a graceful flint and stone building.

The perpendiculars and arched roof lead the eye and the spirit from the earth (stone and carpeted floor) towards  the sky. It is a beautiful harmonious space, peaceful, offering shafts of lights through rose coloured windows and creating an atmosphere in which to reflect. The wall plaques and decorations recall those who lived and died here in centuries past, families giving thanks as they try to absorb their loss.

Nevertheless, the structure of the church and its buildings are constantly under “consultation”. Many of the congregation are not perhaps frequent visitors and therefore today such buildings need to be multi purpose and to find varied roles. They are however great places for music such as the  Vox pop choir during the fete or the excellent jazz band. 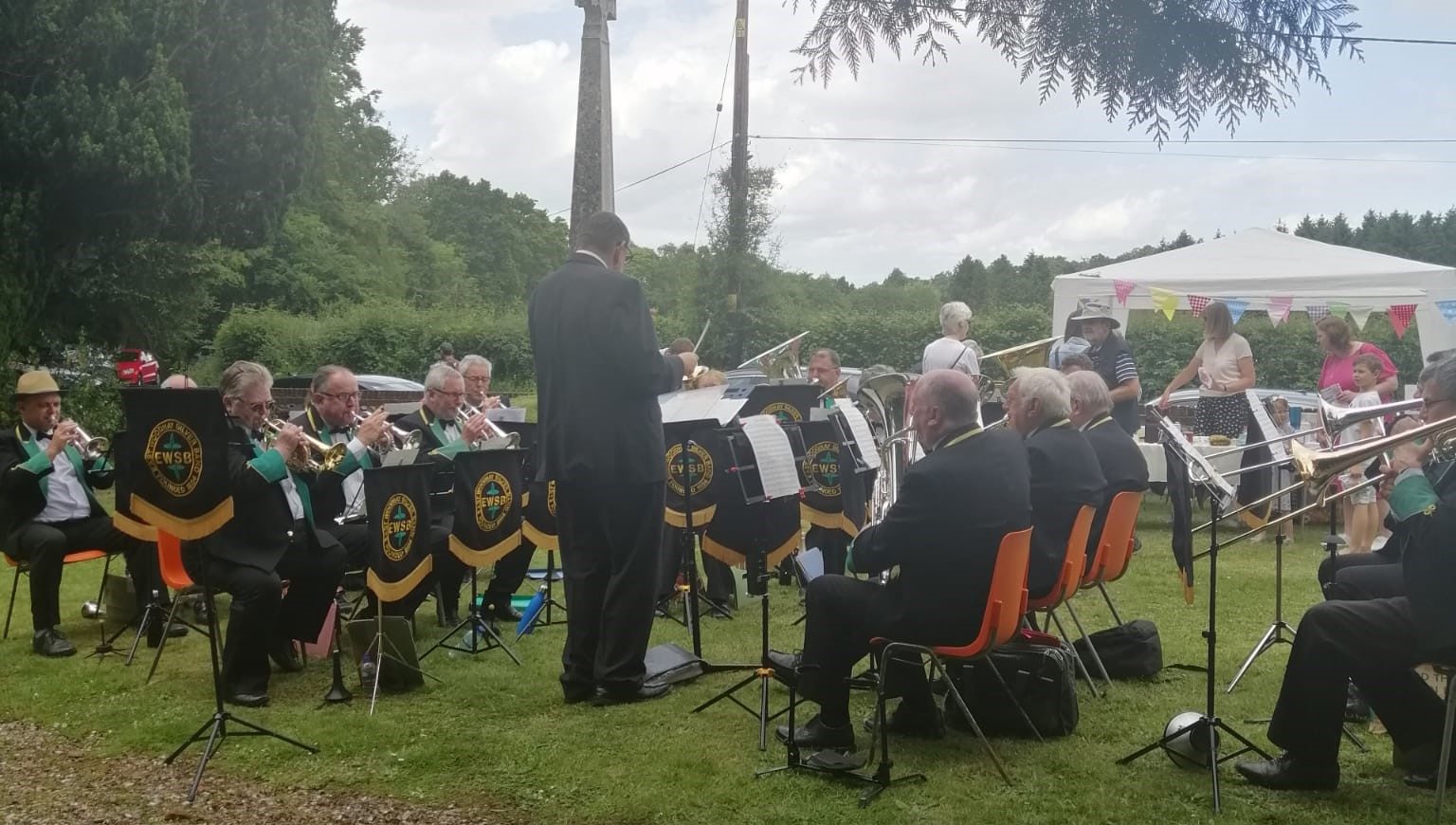 Churches are good meeting places which is where Christianity began: meeting together to talk. Equally the social ceremonies of hospitality and of gathering are still needed, especially in moments of crisis or for the rites of passage in all of our lives. Highclere’s parish church is part of our local history, a mixture of a place of ceremony, a museum for village memories and a space for large gatherings. 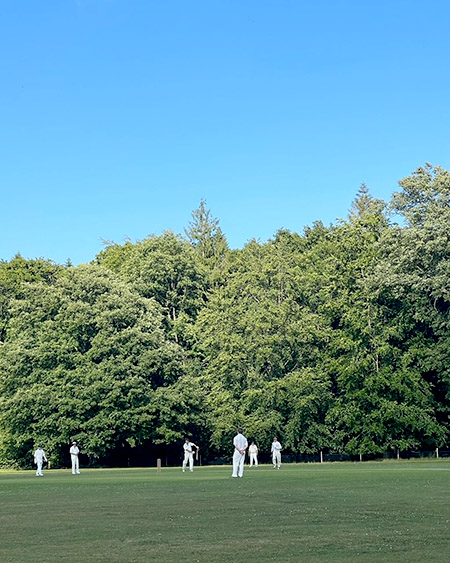 Walking back towards the Castle through all the vivid greens of the park heaped one on another, we completed our 10,000 steps before lunch which was also immensely gratifying. 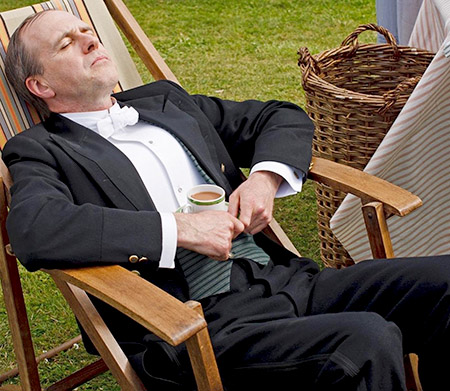 Is he resting or acting?!!

The good weather continued and Sunday was also spent outside playing that most traditional of games: cricket. I am the Match Manager in charge of finding eleven men to make up the team beginning of course with my husband.

Like the fete, it was our first cricket match at Highclere for nearly three years and therefore in some ways it warranted a bit of ceremony. In typical Highclere fashion we began a little bumpily as we had a bit of a search for the keys to the cricket pavilion. 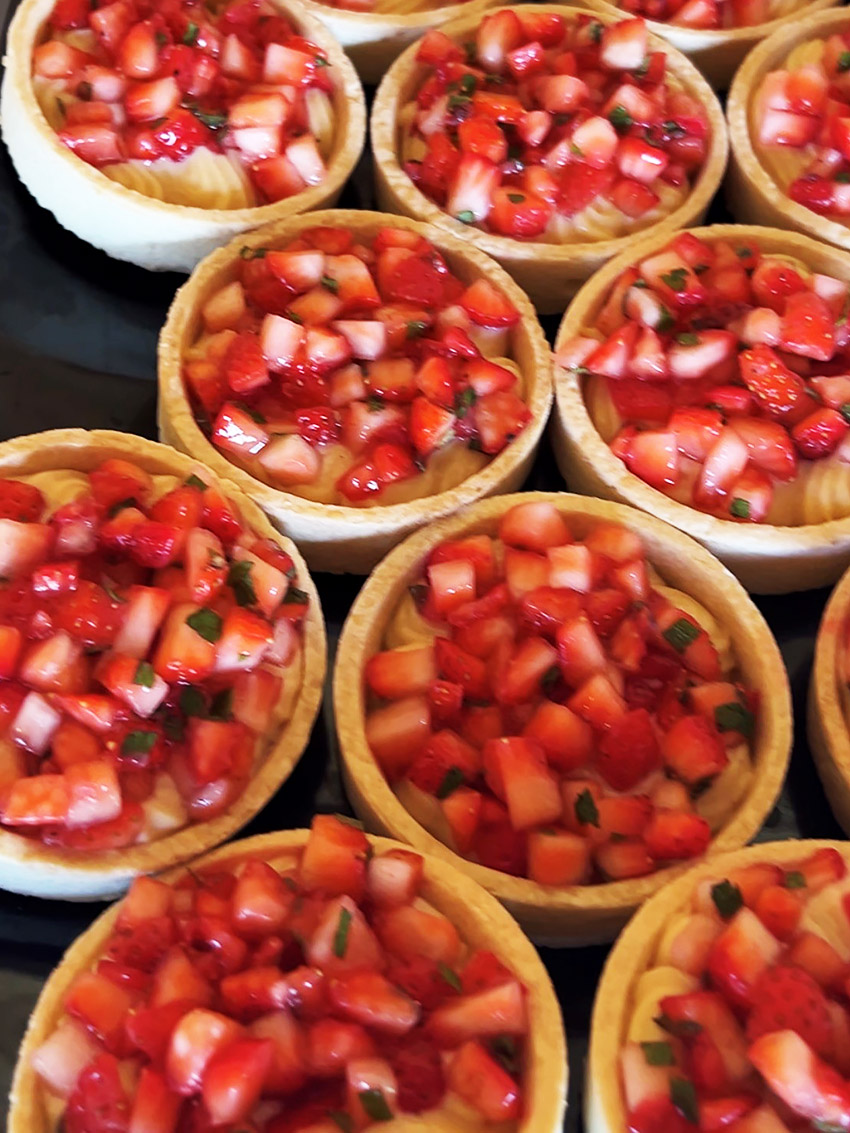 It was our team against the Rifles with the players’ children playing their own game near the Pavilion and rugs spread in the shade on which to doze and idly chat. The much admired centre piece of the event is the cricket lunch followed later on by the cricket tea.

Notwithstanding the bucolic scene however, the game is played competitively and I am delighted to say that we won. 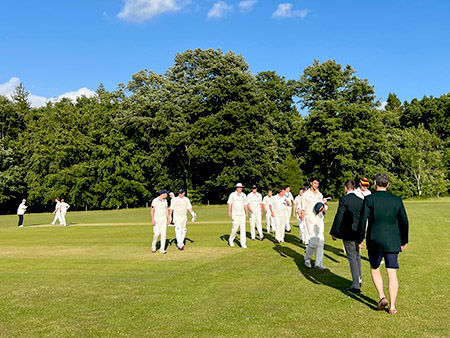 Thank you to Team Highclere for all the hard work and delicious food and help throughout. It was a wonderful weekend. Put the same Saturday for the Fete in your diary for next year!