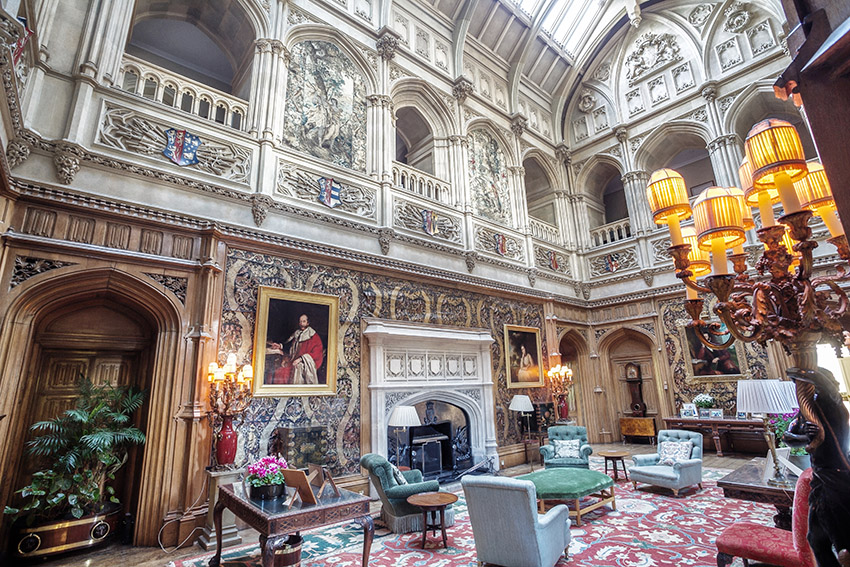 With its spectacular height and light streaming in from the glass roof, the Saloon really is the heart of the Castle. It was created in the space of a far older medieval banqueting hall but, rather than being decorated with gothic armour or tapestries, it is lined with the most extraordinary leather wall coverings. Made in Cordoba, Spain and dating from 1661, the leather was carefully covered in silver gilt, painted, gilded and embossed before being brought to Highclere and partly trimmed to fit the space. It is a work of art and, perhaps rather oddly for a “wall paper”, one of the more valuable things in the Castle. 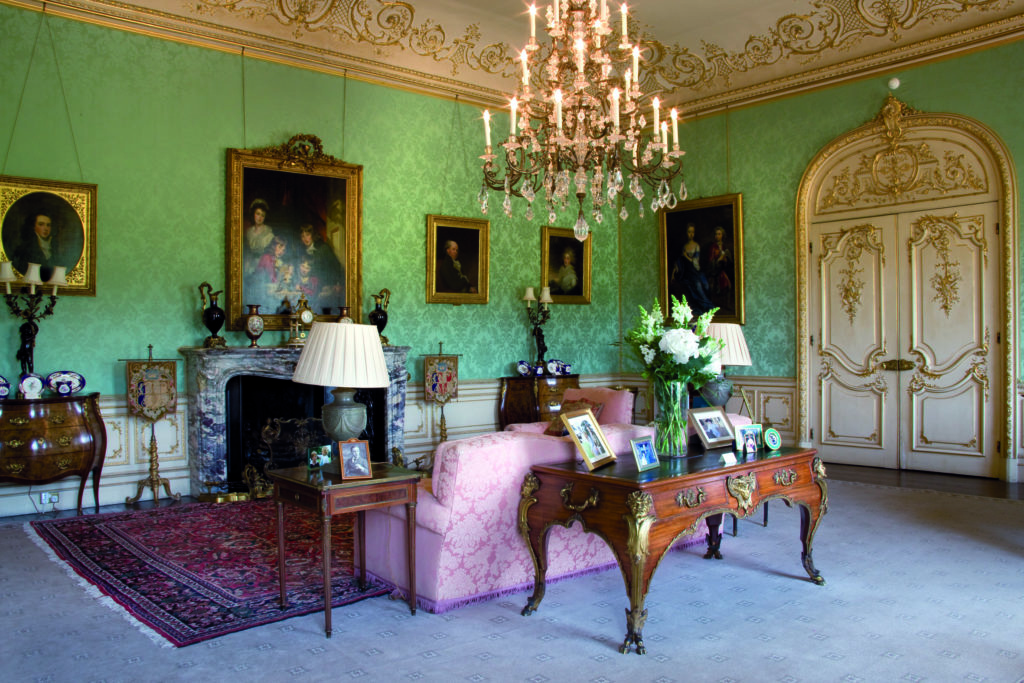 In contrast, the Drawing Room is hung with pale green damask silk which was a wedding gift from her father to the 5th countess whilst the grand Stanhope bedroom, scene of Lady Mary’s illicit affair with the Turkish nobleman in Downton Abbey, is still hung with original red damask silk from a real Royal guest in 1895. The decoration of each of these rooms is part of the heritage and I think this should be kept at that moment in time as the walls of all the rooms tell stories. 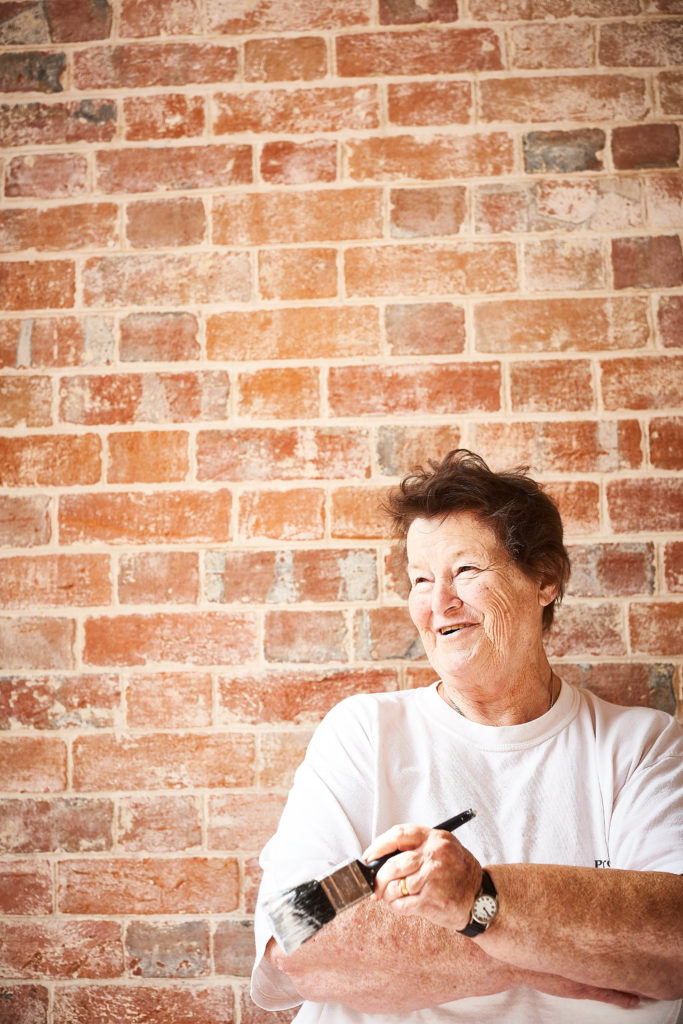 Apart from the silk and leather found in the State rooms, the rest of the Castle offers various wallpapers reflecting, with more accuracy, the actual word. Over the last twenty years or so, Geordie and I have redecorated many bedrooms which were left as something of a blank canvas after World War Two. This was because there were really only two main paint colours available at that time: a shiny cream and a shiny green. Thus many of the corridors, bedrooms and bathrooms just alternated combinations of one of these two colours. Pat Withers, who has decorated here for over 60 years used to be told which bedroom needed to be painted next rather than worry about colour choices.

Rather wonderfully, Pat is still painting although she leaves going up ladders to others now. However, the painting schemes are infinitely more varied. At first, it was a bit of a rush just to make an impression on the building because it was such a huge undertaking. Now it is more of a stately progress. Some rooms are painted, some have special paint effects and some are wallpapered. Like any home, it is a mixture and it depends on the existing furnishings and the inspiration and feeling of each room. 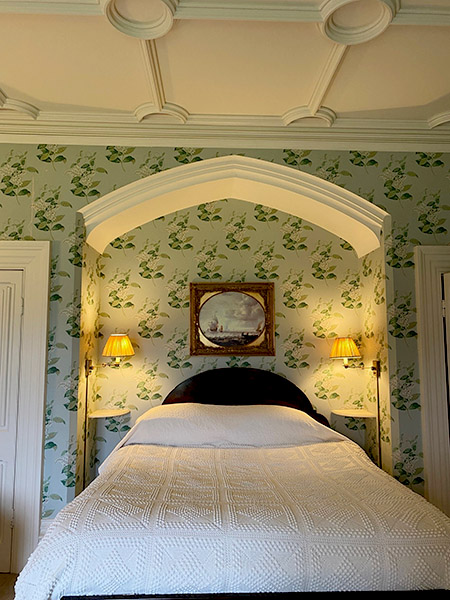 For example, Portico bedroom was full of upside-down furniture and rather lovely linen curtains. As the name suggests, it looks over the front door and portico. With advice from my great friend Sarah (Morris), we used a Coles wallpaper – it is very suitable for the house and, of course, dates from the right period, so it worked with filming for Downton Abbey as it was used as Lady Sibyl’s bedroom. 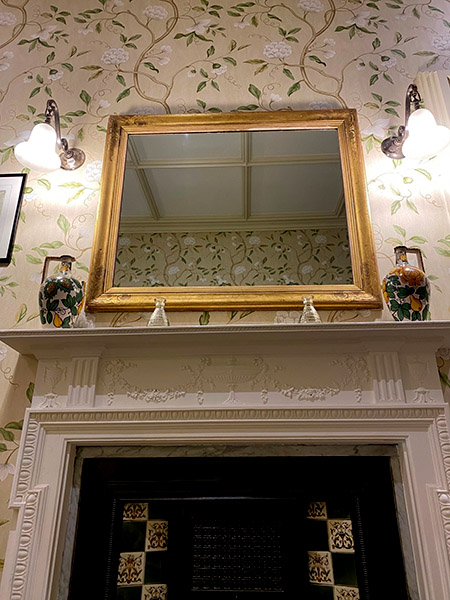 A bathroom on the first floor was a fairly awful shiny green colour – ceiling, walls, mantle shelf – everything the same – now it has a lovely wall paper, a real favourite of mine which, given it was not too large a room, we could invest in some beautiful wallpaper. Queen Caroline’s bedroom, which is south facing, has a huge lilac pattern giving a more 18th century feel to it which I hope encourages guests or visitors to look out and later venture into the garden. Some Italian friends had a spare room with bird themed wallpaper which I fell in love with so, funnily enough, that is now in a third floor bedroom.

Each choice takes time, planning and budgeting as the rooms are often larger than I think they are. The word budget is used a little hopefully and is usually inaccurate as inevitably unexpected challenges arise.

The patterns of the paper are larger and stronger as small pretty patterns tend not to suit the scale of the architecture. Sometimes, however, Pat finds small corners of far earlier decoration which is not only fascinating but the idea also gets incorporated into the planning process – what the shape of the room suggests, what our predecessors chose, what visitors might think, what I like and, of course, what my husband likes or might like if I had asked in advance rather than in arrears. 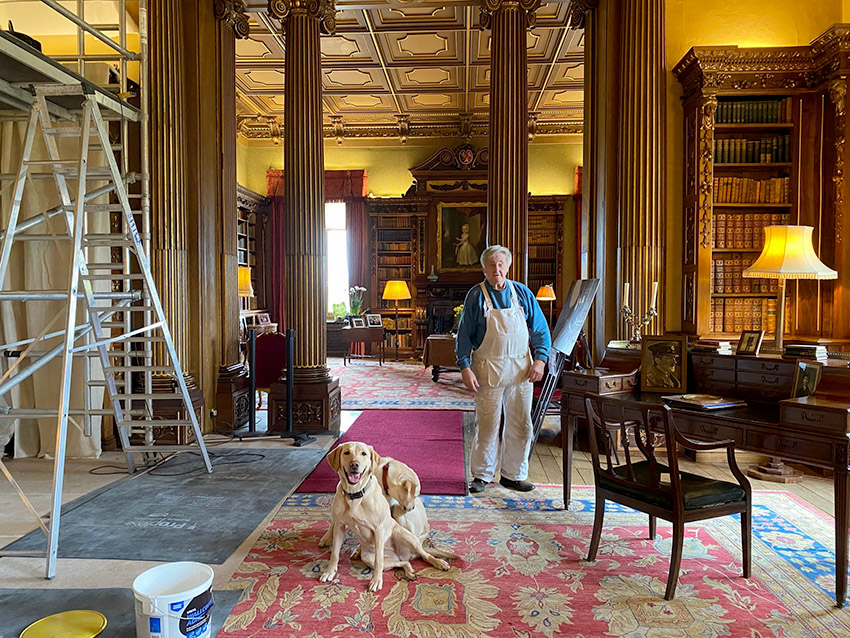 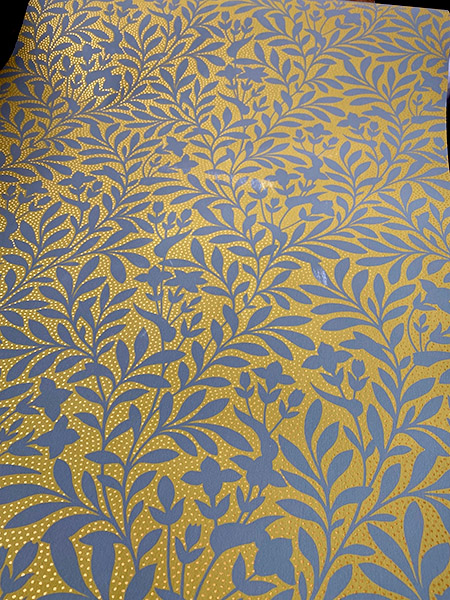 The current project has been on my agenda for two years and, given it is the Library – one of the grandest rooms here, it needed much thought. As ever, Sarah came to the rescue for ideas and discussions and then it was ordered. Given green is already a theme of other rooms the choice fell to something different, a rich texture and one picking up the theme of foliage to emphasise the carvings through the Libary and of course, like every wallpaper we choose, it is made here in England.  Geordie likes it very much which is most fortunate given Pat’s team are half way through! Thank you Team Pat: Mike, Young Richard and Campbell.