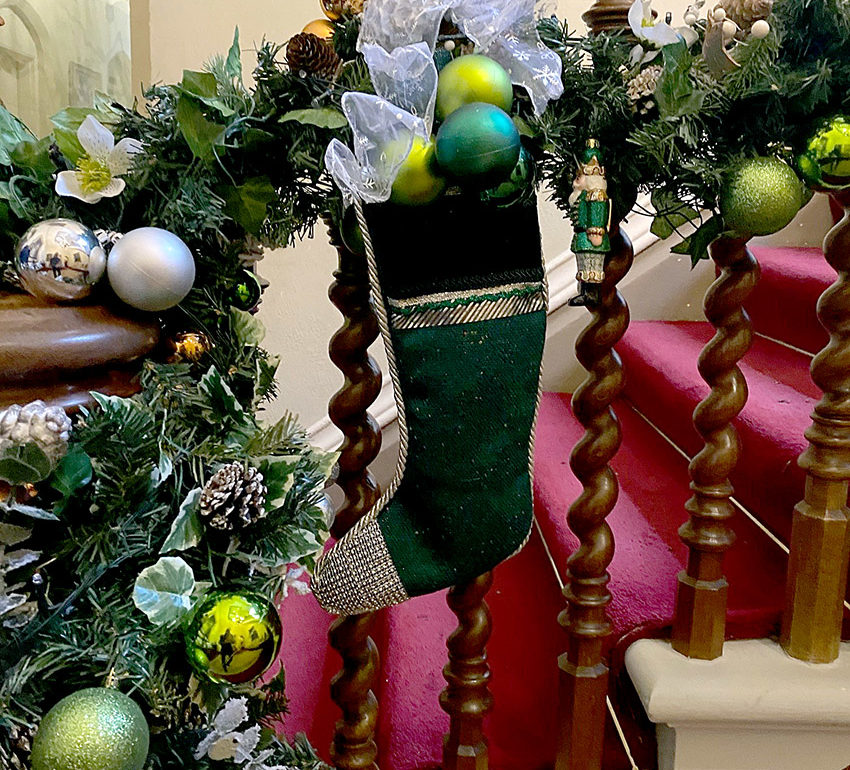 Tennis, football, rugby, golf, cricket, polo, baseball, lacrosse, hockey, billiards, squash – the list goes on. A basic human need is to play and, it would seem, play with balls. 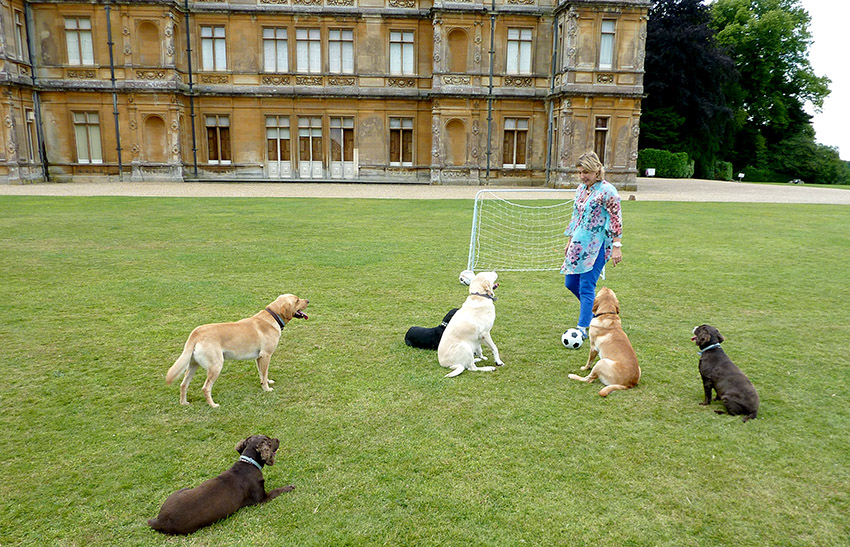 Balls have been part of life in every sense of the inflection of the word from the very earliest times: whether it is a puppy or baby watching something rolling away and giving chase, or a more organised game portrayed on crumbing walls depicting life in ancient Egyptian life. 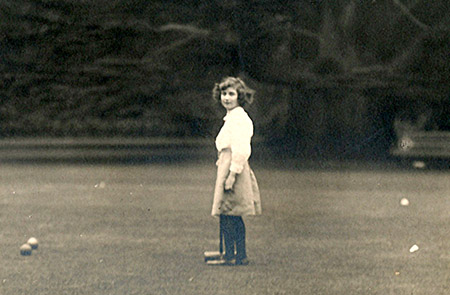 Ball games were certainly described in Greek and Roman narratives and in one scene in the Odyssey, it was the ladies, Nausicaa and her maids, who went to the seashore, and, after washing the cloths, played a ball game on the beach with laughs, giggles and shouts. 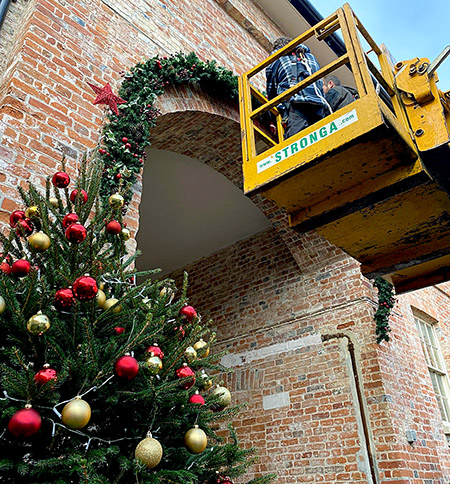 The very word can lead to great hilarity. Sally in the gift shop has entirely failed to live down her immortal lines on the subject which were included in a TV programme. She was caught on camera asking the gardeners, who were in a cherry picker in the castle courtyard attaching various Christmas decorations, if they would kindly raise up their balls. 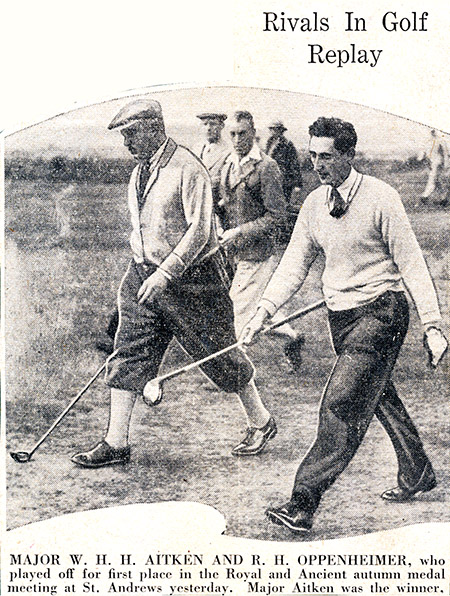 Games and sport are about taking pleasure: the word sport is taken from the old French “desporter”- to divert or amuse. Many require teams, collaboration, planning and the execution of a plan which is inevitably tempered by real life during the course of the game. Equally, they require agility, speed, discipline and esprit de corps which extends to those who watch in a grandstand or in homes or pubs to cheer their teams and players on. 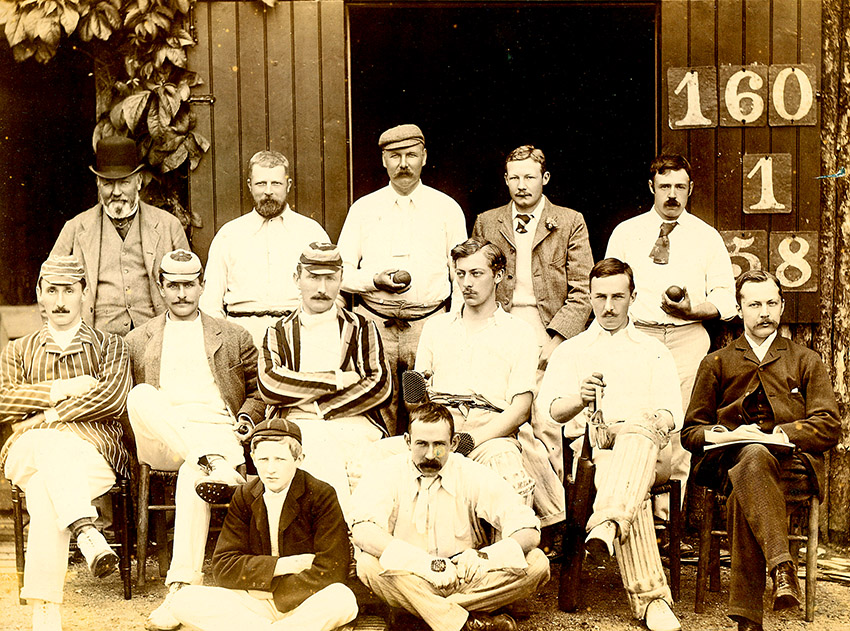 Perhaps such games evoke echoes of our remote past, perhaps they are acknowledging our natural reversionary nature, recalling the serious activities that helped us survive for millennia. In Roman times, an emperor’s standing was often corroborated or enhanced by the games and spectacles he staged in the coliseum to entertain the populace. The drama of football today is similarly related to the audience: everyone freely expressing every feeling, shouting, waving, punching the air, in some ways a relief of tension.

The one thing we have all perhaps missed the most during the pandemic is company and the hospitality which lies at the heart of society, the fact of being together. It was therefore a great treat for us to be invited by Ralph Lauren to watch the Ladies finals at Wimbledon. 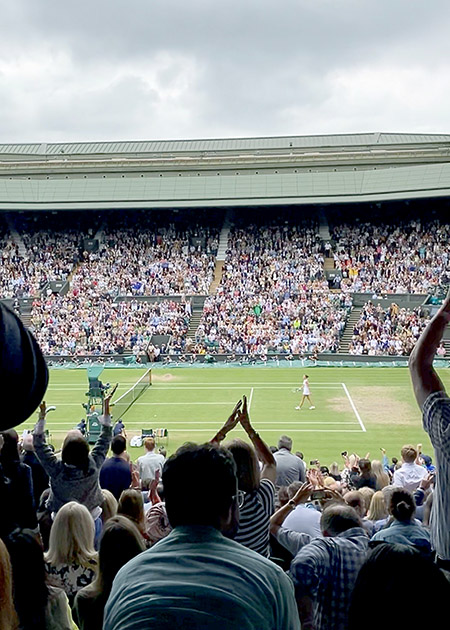 Historians believe that tennis originated in 12th century France, where a ball was struck with the palm of the hand – jeu de palme (game of the palm). This gradually evolved into the game of real tennis. In the 14th century Louis X built indoor courts and by the 16th century, rackets began to be used and the game began to be called tennis from the French term “tenez” – to hold or receive. However, the development of the tennis game known best today – lawn tennis – is claimed by the British in the 19th century and Wimbledon still holds a special place in the imaginations and heritage of the game, whatever nationality.

Saturday’s Finals was an amazing match and the speed and elegant power with which each point and ball was played was extraordinary. Like all top sports, it was the result of practice, balance, perseverance, and competitiveness and, in the end, it is about winning. The ritual or tradition of Wimbledon is also a spectacle: slightly overcast skies (it is the British summer), appearances and matches orchestrated and organised with pride and precision from the ball boys, to the umpire and the most precise unrolling of the carpet for prize giving. 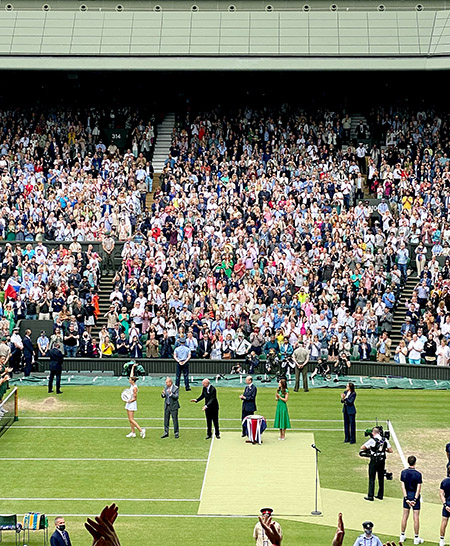 Different to football but with the same crowd participation with the oohs and aahs and laughter of the audience as we held our breath through various points before cheering and clapping.

After such ceremony, it was back to Highclere to throw old tennis balls for the dogs and to kick a football around for them as we set off in the rain for a welcome walk at the end of a day. Such is the English summer. 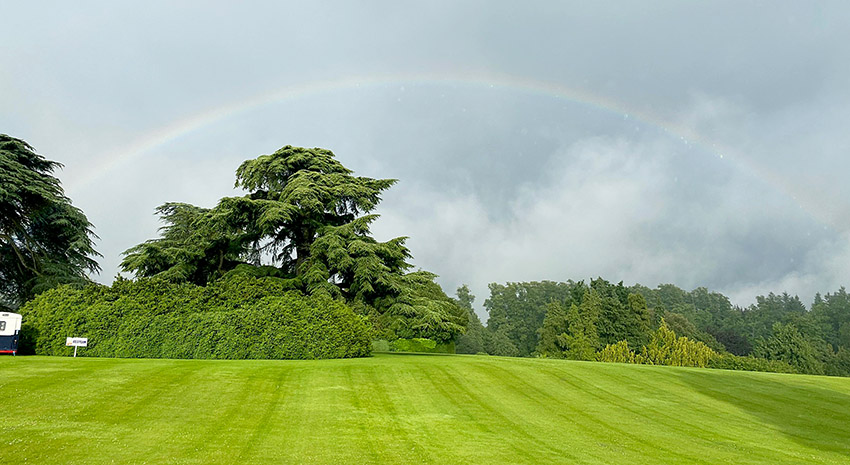