Just behind the walled garden are various wooded areas overgrown with brambles and scrub. On one side there is a park field grazed by sheep and each spring one or two lambs predictably escape, like all sheep, and tangle themselves up disastrously in the brambles. It became obvious that somehow we needed to clear it back. Simon, the Farm Manager, and I decided that we would buy and rear some pigs.

Thus Thelma and Louise arrived and were eventually named. At first they seemed to make no impression on the mess and intertwined scrub but it is a few months on and I can really see the result. It is transformational, especially to the soil.

Ernie on the left, Thelma and Louise on the right

Having named the pigs and put them to work, we then thought we would breed from them. Welcome therefore to Ernie who has been borrowed for a month in order to look forward to some piglets in the spring. The breeding period is very short: they will arrive in 3 months 3 weeks and 3 days from when Ernie mated with them which, naturally, we are not quite sure of, so much of this precision is somewhat lost. Ernie has also made quite an impression on the clearance project but his departure will be a good thing otherwise they will do the job too fast. Already I can see that I will need to think of another area to set them to work on after they have had their piglets but, for the moment, there is good shelter where they are, a ditch with water to wallow, and a hut full of straw when needed.

The pigs in question are an old endangered breed – British Lop Eared pigs – friendly and good at living outside. There have of course been pigs at Highclere before. The 5th Earl had an award winning herd of old Berkshires and his father was also a keen pig breeder. Their main concern was how many piglets they could produce and how well they could be fattened up but I am rather more interested in integrating them back into our cycle of farming and letting them roam naturally without any artificial fattening and forced breeding in confined places.

Louise, my PA, was not quite sure how to take the fact there are now two Louises – one human and one porcine. However, she kindly came down to help me feed them and then thought she would try her first selfie with a pig. She need not have worried! The remains of old ramparts 3,500 years old which would have been some 30ft high

It is easy to see why pigs are such excellent animals to domesticate and why they have been farmed in this area for so long. As I have mentioned before there are the remains of both an Iron Age and a Bronze Age settlement at Highclere and many others nearby. Stonehenge lies just 30 miles west of us and two miles north east of Stonehenge lies Durrington, one of the largest Neolithic settlements found so far with perhaps 1,000 houses. Unsurprisingly, thousands of animal bones have been excavated in these settlements, of which some 90% were from pigs with the remainder from cattle.

It is so interesting to think that keeping pigs in this area is part of such a long history and hopefully means that my pig venture is more likely to be successful! A winter’s view from Beacon Hill 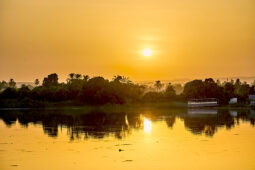