“The sat nav says turn left” “Where? I can’t see any turning?” “Back there. You’ve passed it” Why didn’t you tell me?” “It would help if you drove more slowly and I did try.”  “That is not helpful – we are now late. Wretched thing – it’s lost its signal. Find a map.” “Did you mean please?” A new old framed map for the room called Orient

This seems often to be the extent of modern geography: arguing with a sat nav. Maps, however, mark out rivers, inclines, the formation of hills, the drop down to seas, the roads and trails we have created across them, yet today  just tend to gather dust on shelves. Geography is a generalist discipline. Those who study it gain insights into the earth: its geology, environment, climate history, water courses and the formation of the societies and communities it supports. It is grounding in every sense of the word.  Edmund Burke (an 18th century Irish statesman and philosopher) commented “Geography is an earthly subject, but a heavenly science.” It is founded on man’s thirst for knowledge and instinct for exploration. I often think of the extraordinary undertaking of sailing across the Atlantic 300 years ago or earlier, of travelling across the prairies of north America to find new homes or of travelling across the Mediterranean to explore the pageantry of other lands. Travellers had to deal with the unknown, with fear and illness, of things going wrong. 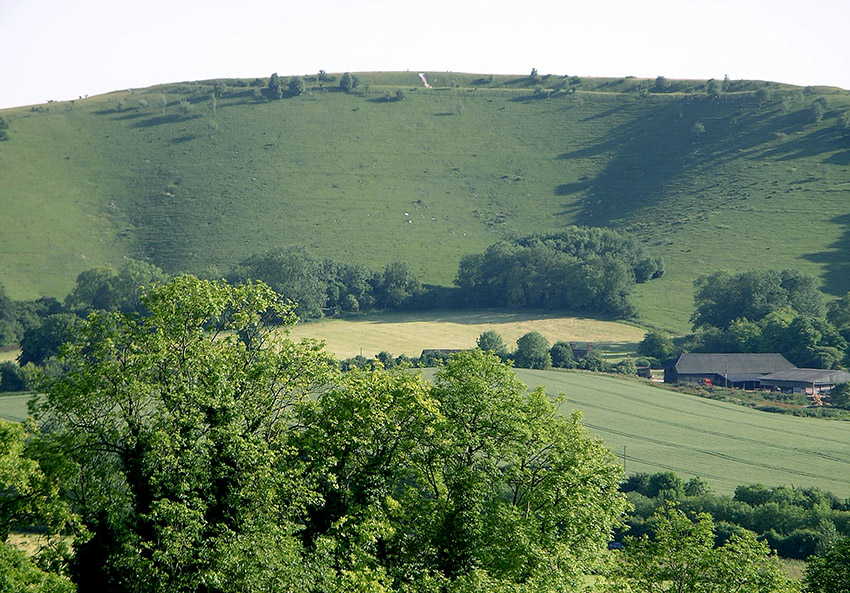 Beacon Hill, the iron age settlement was on the summit, the homes surrounded by a 30ft rampart

Travel and subsequent settlement are not  modern phenomena. The Romans overran the native British communities in AD 43, destroying homes and rebuilding new ones – villas. Beacon Hill in the centre of the Highclere Estate bears witness to this in the landscape remains of an iron age fort.  Five hundred years later the Britons and Romans were likely intermarried and living here when the Vikings arrived with their own settlement plans. Now the Roman villas are even less distinct than the Iron Age homes, although we still drive in our cars along the path of Roman roads. Open any old map and you can see firstly the distinct lines of the natural world on top of which we have imposed our own lines of ancient societies and modern infrastructure.

One of the first written records of Highclere is a document describing the boundaries here. Essentially a map, although in words rather than pictures, it details what to follow and where to go. You can still see the lines today in the landscape if you look.

Sadly, geography is not always taught today, choices ask for compromises and  often pupils in this country have to choose between it and history. History records friends made and arguments fought, geography tells us about where and how we live. Economic geography suggests that by far the majority of all trade is within 500 miles of each country. In fact, 44% – 50% of all UK import/export trade is with mainland Europe, our nearest neighbours, which makes sense in terms of travel costs. It is probably better for the planet that we import and export food and manufactured goods there rather than with somewhere 5,000 miles away. We are now lucky enough to be able to share our “geography” in reality and welcome visitors back to Highclere.  Sharing “virtually” is a wonderful bridge when travel itself is not possible and reminds us of what we would like to do if we could.  We watch travel programmes, listen to podcasts and soak up information from the internet. Nevertheless, there is still something magical about a map with its possibility of creating a journey, of following that road over the page and into another land. To adapt John F Kennedy’s quote: “Geography has made us neighbours. History should make us friends. Economics will make us partners, and necessity should make us allies”

Luckily, I married a man who read Geography at Oxford and thus has the advantages of the generalist intellectual curiosity. Despite that we too argue with the sat nav and each other in the car and I do have always have dog eared real paper map to hand, just in case.