Walking down a long, grey ramp into the aircraft hangar at Duxford near Cambridge, the B-17 Flying Fortress was parked up just to the left. Inspiring and sobering, it is a huge plane, ahead of its time and bristling with guns. Yet the crew would all have been so vulnerable: the pilots peered out through Plexiglas, the rear gunner sat wholly on his own at the back unable to wear a parachute and the Ball Turret Gunner was in a bubble underneath the plane. In fact, of the 12,000 B-17’s flown in WWII, 4,000 never returned. Some of Highclere ‘s plane team, Paul, me, Steve and Roger

We were filming with the BBC, picking up a story from a book I wrote about Highclere and World War Two. Eight planes went down here on the Estate during World War Two and, as a result, I now “own” a few remains of a B-17. From the burnt twisted metal, to a recognisable pot of  Brylcreem and some jacket buttons, I am effectively looking at the tatters of men’s lives, very conscious of the grief of their families. Earlier this year I wrote a fun April Fool’s spoof blog, which led via “Star Wars” to the discovery of the airmen’s relatives. Since then, we have welcomed families of some of those on the planes that crashed here which has been so positive and uplifting.

Steve and I admire the B-17 and on the right, Roger Mills who flies the “Sally B” B-17 today

The next stop after Duxford was the American Cemetery near Cambridge where two of Highclere’s US airmen now lie: Jake Buikema and Robert Sprout. Immaculate rows of carved white crosses, beautiful autumn trees, views and words. Just as in the First World War, thousands of names of men, of brothers, sons and fathers, are carved into a wall of Portland stone because they sleep in unknown graves. They include Glen Miller, the famous big band leader, and Joseph P Kennedy.

The American Cemetery at Cambridge Names of those who sleep elsewhere

Walking along the wall I read the words written by President Dwight D. Eisenhower who, as a soldier, commanded the Allied troops on D-Day, …

“… the Americans, whose names here appear, were part of the price that free men have been forced a second time to pay in this century to defend human liberty and rights … Here, we, and all who shall hereafter live in freedom, will be reminded that to these men and their comrades of all the Allies we owe a debt to be paid with grateful remembrance of their sacrifice and with the high resolve that the cause for which they died shall live eternally.”

As we stood in the Cemetery, a lone Spitfire flew over our heads, paying its own respects to those below.

It is now two months after our ‘Heroes at Highclere’ event and the unveiling of our cedar memorial to the airmen who were lost here. We have returned to Siddown Hill above the Castle to mark the crash site of the B-17 with a cross, with a wreath and a plaque to remember them. They were not the only heroes – other airmen died here whilst millions of other airmen, soldiers and sailors died elsewhere, and still do, whatever the moral judgement assigned to the war. The numbers are overwhelming but in their letters and diaries the individual stories bring them to life:

“I am sure his blood is this day a rose upon England’s land taught by body and spirit to assume the fairest aspect.”

One of my most prized books is the letters of Wilfred Owen which Geordie gave to me. He and all the other war poets left us such a body of poetry which remains hard to read, to feel for the undone years.

I sometimes feel that so many stories and lives are held in the books, letters and landscapes here at Highclere. Yet our home is also a monument to man’s creativity, energy and long term vision. We are able to live in such a beautiful environment due to the courage of those who fought and of those who survived. Our ethos here is remember to say thank you, to serve in the memory of those who died , and to strive for reason and peace. In a small way, to be able to sit together at a table and share food, wine and conversation. 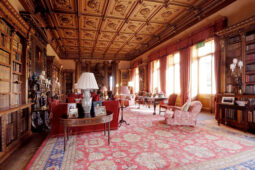