Roads are made for Journeys not Destinations Roads are made for journeys not destinations
(Confucius)

Saturday afternoon I set off on my bike with the dogs down the drive in the Park to “Redpools” where there is old sunken woodland, paths that are never straight and a pool or small lake that merges with rushes and marshy saplings. 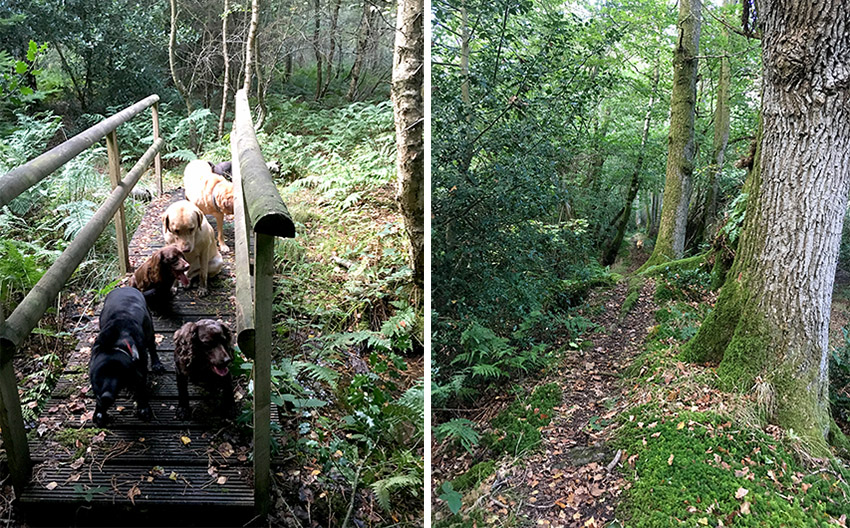 Summer, such as it was here, has definitely slipped away and I had remembered a sweater. Nevertheless, it is a magical time of year, “seasons of mist and mellow fruitfulness” and I had looped a bag over my handlebars hoping for the very last blackberries or more likely crab apples and pears when I came back and round through the gardens. Some of the paths were strewn with boughs and a bit narrow, not ideal biking.  Determinedly I trundled my bike along, round and over, rather keen not to fall over as my husband would say told you so – silly place for a bike. The dogs, however, were very happy and swimming. Old paths and “drives” (roads) are fascinating, not merely mapping my journey today but also leading me in mind back into the past. These muddy paths around the roots of old trees are the same ones local children took to fish here in the Second World War. Rations were short and everything helped and they lived in a little cottage in the fields behind.

Old maps of Highclere show the ancient routes, some are now overgrown or even removed, whilst others are still here 1,000 years later.  A little imagination and I can almost see where the Roman soldiers may have marched between the hills or Robert Herbert’s carriage might have passed in the eighteenth century. Cattle and sheep would have been driven along the “drove” roads.  The deeper the lane the more embedded it is in our past, the more people and animals have passed along the way packing it down on their different journeys, therefore the older it is.

Leaving the muddy tracks behind I cycle back towards the Castle gardens on my mission for pears and crab apples. Carol and Debbie, who help me in the house, have become adept “still room” hands, following old recipes, bottling and freezing. Amongst it all, they had picked a quince jelly recipe from the 18th century for some reason – it looks delicious! We have too many cooking apples and I need to collect them and make a plan.  The eating apples are shared with the horses, who lean hopefully across the fence.

My husband and the farm manager, Simon, have only recently finished the harvest – it was late and not easy, although it is rare to meet a happy farmer during harvest. As in any year, some crops fared better than others. The Royal Berkshire Show took place this past weekend and our crops and fields had been submitted in various agricultural classes. Proudly, we collected many cups from the best rapeseed (probably due to my combining!) to oats and other arable fields.  Oats are very important to us as we sell them to racehorse trainers and other horse yards. It is rather the same message as my recipe book: from field to table but this time from field to stable. Good whole food, not processed with chemicals but just proper food harvested with a known provenance. Horses certainly like oats and this evening Maggie our groom gave me tip which was to add the oats to the soaking sugar beet for 15 minutes, so they plump up and that helps them to be absorbed.

Perhaps it is all the same, tips for friends whether two-legged or four-legged … We are all going to meet in church for the Harvest Festival at the end of this month, animals, tractors, people and  Bishop David.