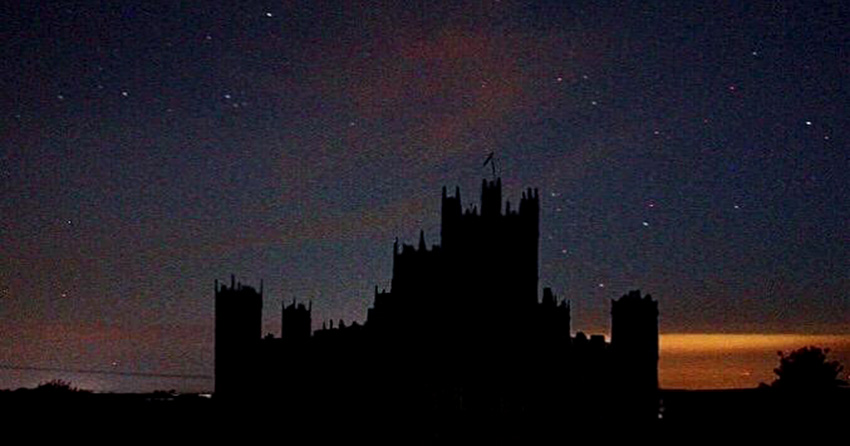 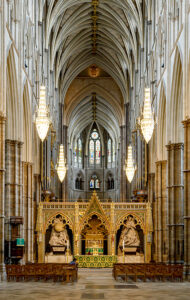 Today, all our thoughts and attention are with the processions and prayers taking place in Westminster Abbey for our final farewell to the Queen. It is a beautiful building for such a solemn occasion, adding to the soaring music and majesty of the event.

Winston Churchill once said: “ We shape our buildings; thereafter they shape us.” Many of the great cathedrals still extant today were created during what is often called the Age of Faith in the Middle Ages. The thirteenth and fourteenth centuries saw an explosion in the building of churches and cathedrals in order to help to ensure a place in Heaven. New techniques using pointed (gothic) arches allowed more space and light into the buildings compared to earlier circular constructions. The desire to bridge the transition between earth and heaven and the results can still be seen throughout Europe. 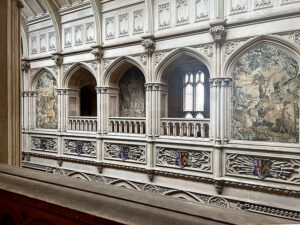 The architecture of Highclere is often described as gothic, or gothic Italianate. The symmetrical silhouette is detailed with pinnacles, corner towers and the Great Tower which reaches towards the sky. The Victorians took much of their architectural and symbolic inspiration from the middle ages, particularly from its legends of chivalry. 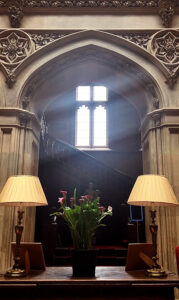 Thus at Highclere, the glazed gothic windows which filter light into the Saloon above the Oak staircase reflect a cathedral style, its church-like architecture recalling the estate’s heritage when it was originally a bishop’s palace. 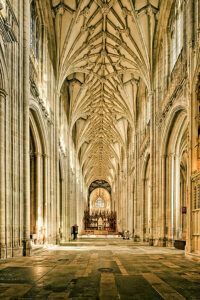 Highclere was owned by the bishopric of Winchester from its earliest days in the 8th century to the reformation of the churches under Henry VIII in the 1500’s and it was Bishop William of Wykeham (1324-1404) who built a medieval  palace at Highclere. There was also a church and a chapel here, neither very large, but still at the heart of home and life. Wykeham’s cathedral, however,  was in Winchester, twenty miles south of Highclere and one of the largest in Europe.

Today, all eyes will be on only one cathedral: Westminster Abbey, so named because it was the West Minster as opposed to St Paul’s which was the East Minster. The Abbey’s heritage is intertwined with the penultimate Anglo-Saxon King, Edward the Confessor, who was created a saint in 1163. Britain’s oldest door can also be found in Westminster Abbey, it is in the passage leading to the Chapter House. 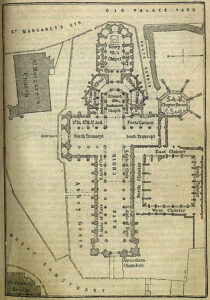 Funded and created by later Kings, Westminster Abbey’s religious space enfolds the concept of cathedral and sovereign power into one and later kings could claim kinship and devotion with the very first king buried here.

Much of Abbey was rebuilt around the year 1245 by Henry III in competition with the French King. It was the age of relics when enormous sums of money was spent on religious artefacts. Thus Louis IX of France had, at huge expense, bought the Crown of Thorns and was building a dazzling chapel on Paris’s Île de la Cité in which to place it reverently. In London, at the Abbey, Henry III  committed money and men to create the tallest vaulted ceilings in the world at that time, a gothic inspired structure to laud both the king and the realm.

Today, Westminster remains a place of pilgrimage, both a mausoleum and somewhere to celebrate life. Poets, author, statesmen, Kings and Queens are interred here and remembered. Nor can anyone miss the grave of the unknown Soldier who stands for all those who perished in World War One. 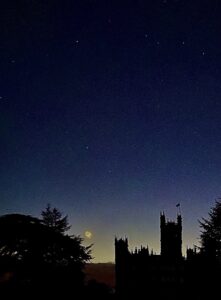 In addition, the Abbey remains a royal peculiar, subject to the direct jurisdiction of the monarch and therefore where all gather for today’s solemn events. It was here in November 1947 that Princess Elizabeth married Prince Philip of Greece, (H.R.H. The Duke of Edinburgh), here she was crowned Queen in June 1953 and here that she makes her final pilgrimage in September 2022.

Our reflections and thanks lead us all.   “Stop all the clocks, …Bring out the coffin, let the mourners come” (WH Auden)